This week we have updates on Eagle Mountain Gold (Z), Ironclad Performance Wear (ICPW), Global Minerals (CTG) and we introduce an exciting new Company called Cryoport Inc (CYRX), which has developed a unique product and service to ship sensitive products for the life sciences industry.

If all goes as planned, Eagle Mountain Gold Corp. (Z – $0.14) will merge with Goldsource Mines Inc. (GXS – $0.335) on February 28, 2014. The last hurdle, getting shareholder approval, was overcome with ease last Thursday as over 99% of tendered shares voted in favour of the new business combination. The name of the combined entity will be Goldsource Mines Inc.

The merged Company will initially focus on advancing the Eagle Mountain gold project in Guyana, South America. This project has an existing NI 43-101 compliant resource of 188,000 indicated ounces and 792,000 inferred ounces of gold located on 250 hectares of the 5,050-hectare prospecting license with excellent potential for expansion of resources and nearby initial infrastructure for development.

An estimated 40% of the gold resource is considered mineralized saprolite which will be the initial focus of development with the remaining 60% as fresh rock. The saprolite and fresh rock both remain open laterally and to depth, showing strong mineralization along defined edges. Outcropping mineralized saprolite is potentially suitable for initial low cost – low strip ratio open pit mining and gravity processing.

The current executive officers of Goldsource will remain in place and Mr. Ioannis Tsitos of Eagle Mountain will be appointed President such that the executive management will be as follows:

This is a strong management team, with development, operational and Guyana experience, and an ability to finance in difficult markets through a proven successful business model used on previous projects. It’s important to know that the current Goldsource team also leads well-known SilverCrest Mines (SVL – $2.66), and that Mr. Tsitos has numerous years of experience in Guyana and the mining industry in general having spent 19 years with BHP Billiton group.

J. Scott Drever, President of Goldsource stated: “The proposed transaction with Eagle is the opportunity that Goldsource has been seeking for some time. It matches our management skill sets with a gold deposit that can be brought into initial production in a short period of time with minimal capital and low production costs per ounce. We will take a phased approach business model with incremental increases in production at reasonable capital costs with cash flow being directed towards the development of larger facilities and increased production levels.”

Ioannis (Yannis) Tsitos, President & CEO of Eagle Mountain Gold added: “Our Board and myself are very pleased to have concluded this agreement with Goldsource Mines Inc. This proposed “merger of equals” is the most important milestone in our corporate history to date. In such difficult economic times for the mining industry, this transaction is proof of the inherent value of the Eagle Mountain gold deposit. With such an asset base and a recommended Board and Management team with such financial and mining expertise, we are confident that we will serve the new Company very well in its future development activities. Eagle Mountain Gold, and now the new Goldsource team share a desire to be part of a development, which will not only create value for the merged companies’ shareholders, but one that can also make important contributions to the development of Guyana and the well-being of the Guyanese people.”

Here’s an opportunity to potentially earn 28% in a week’s time and to become part of a Company that will fast-track the Eagle Mountain project into production with low capital and operating costs. Profile Page

Ironclad Performance Wear Corporation (ICPW – $0.20), a leader in high-performance task-specific work gloves, announced that Jeffrey Cordes has joined the Company as its new Chief Executive Officer and a member of its board of directors. Mr. Cordes replaces Scott Jarus, who resigned late September last year.

“We are delighted to welcome Jeff to the Ironclad family. Jeff has extensive industry experience and an impressive track record of driving strong operational performance to enhance stockholder value. We believe he brings the right leadership qualities and the technical and operational expertise to move the Company forward,” said Vane Clayton, Chairman of Ironclad’s Compensation Committee, who led the search for a new CEO.

Additionally, Ironclad named Bryan Griggs as its new Executive Vice President Sales and Marketing. Mr. Griggs brings more than 15 years of executive experience in the apparel industry, including sales and operational assignments across industrial and branded consumer apparel companies. Most recently Mr. Griggs served as Division President at Propper International, a leading Company in tactical and military apparel. Prior to Propper, Mr. Griggs served as Vice President of Sales at 511 Tactical, a long time business partner of Ironclad’s. Mr. Griggs also has important experience working with other companies including Otto International, Columbia, and Nike.

We’re optimistic that the new management members can put this innovative Company back on the right track towards profitability. Profile Page

At Global Minerals Ltd. (CTG – $0.265) Mr. Larry Childress was appointed to the Company’s Board of Directors. Mr. Childress has been a successful entrepreneur initially in oil and gas exploration and later in real estate development and banking. He graduated from the Missouri School of Mines (now the Missouri University of Science and Technology) in 1969 with a B.S. in Petroleum Geophysics.

In other news, we heard that preparations to collect a bulk sample from the Strieborná vein at Global’s Strieborná Silver/Antimony project in Slovakia have already started. Remember that the Company needs a sample from the vein to conduct metallurgical tests on. In order to reach the vein, miners will have to make a 100 meters long tunnel, starting from the existing underground tunnel at level 6, located approximately 180 meters below surface. At this moment they’re laying rails underground so that the blasted waste rock from the new tunnel can be transported and hoisted to surface.

We keep our eye on this interesting commodities Company that is advancing its promising silver/antimony project. Profile Page

The Company which we want to present today is Cryoport, Inc (CYRX – $0.51), which just announced financial results for the third quarter and nine months ending December 31, 2013. Next to its exceptional products and services, we also like the fact that the Company reported its ninth consecutive quarter of revenue growth and that it expects to maintain its current momentum.

Cryoport’s business is situated in the life sciences industry, where biological materials, such as vaccines, cell lines, and specimens need to be shipped at cryogenic temperatures (between -150 degrees and -196 degrees Celsius). The market size for cold chain logistics is estimated at $1.5 billion.

Although temperature sensitive storage and cold chain logistics have existed for years, the industry hasn’t come up with a safe, reliable and economical way to do so. Millions of dollars in high value products are lost daily because they’re being shipped in less than optimum conditions. In fact, these failures have gone on for so long that they’ve become expected and are considered ‘a cost of doing business’.

Part of the problem is the use of dry ice as a coolant (carbon dioxide chilled to minus 80 degrees Celsius). Dry ice has several drawbacks, one of which is that it doesn’t reach the cryogenic level of minus 136 degrees Celsius at which all biological activity ceases. Secondly, it doesn’t evaporate uniformly, leaving uneven temperatures in the materials. And thirdly, because of the evaporation, someone must physically replenish it every two or three days en route. Clearly a better alternative is called for.

The Cryoport solution is a cost-effective, state-of-the-art, end-to-end solution for shipping frozen biological materials. The system combines an innovative pre-packaged vapor dry shipper with web-based Cryoportal ordering technology and international logistics management to track and monitor the integrity of frozen shipments worldwide. It works as follows:

After an order is submitted by way of the Cryoportal software, Cryoport arranges to send a Cryoport Shipper, pre-charged with liquid nitrogen, via a carrier delivery to the origin point of the specimen shipment.

Based on the information entered into the portal, Cryoport prepares the paperwork and attaches it to the shipper (air bill, commercial invoice, regulatory labels, etc.) for the entire journey. When the Cryoport shipper arrives at the point of origin, the recipient staff simply loads the materials, closes the shipper up and makes it available for pick-up by the already-notified carrier. Cryoport has already prepared and attached the destination address label.

Finally, upon arrival at the shipment destination, the recipient unloads the materials from the shipper, closes it and makes it available for pick-up by the carrier for the return to Cryoport for recycling. Cryoport has already prepared and attached the return shipping address label.

In addition to the direct cost savings of shipping with Cryoport versus a dry ice shipper, the Cryoport system has 3 elements that provide significant benefits and reinforce its overall value:

CryoPort, Inc. has developed a game changing solution to the challenge of shipping biological materials, such as vaccines, cell lines, and specimens, under frozen storage conditions.

Thanks to Cryoport’s solution, life science companies can outsource the transport logistics to one company that has both the technical understanding for the requirements of frozen transport and the logistical connections to make it happen in a cost effective way. Cryoport, Inc. has established partnerships with major transportation companies, like FedEx and DHL, allowing it to deliver temperature-sensitive biomaterials in an increasingly complex and time-sensitive global environment. 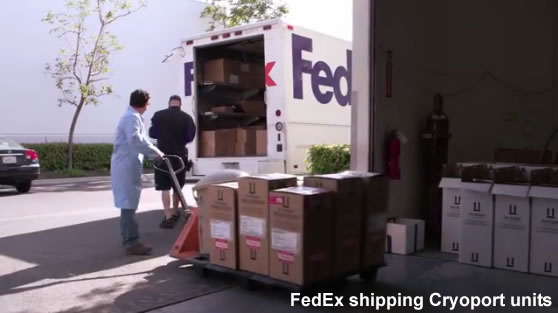 After the third quarter results were announce, Cryoport’s Chief Executive Officer, Jerrell Shelton, commented: “We have more than doubled our customer base over the past nine months and are in the early adoption stages with a number of larger life sciences companies. Revenues related to reproductive medicine, in-vitro fertilization in particular, are increasing as is our animal husbandry business. During this current fiscal 2014 and beyond, I believe we will continue to drive shareholder value by becoming even more effective in increasing market awareness, closing sales, serving customer needs, efficiently managing expenses, and prudently investing capital in support of our growth plans. Our Cryoport team is indefatigably motivated for success.”