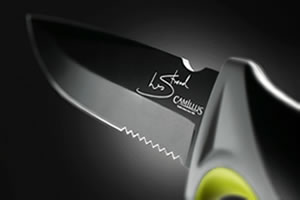 The new Les Stroud knives and tools will soon be available in stores throughout Canada and the United States.

The SHOT Show, held last week in Las Vegas, was a phenomenal success for Camillus Knives, one of the brands of Acme United (ACU – $10.03). Hundreds of visitors showed up at the Camillus booth to see the new knives and to get a glimpse of “Survivorman” Les Stroud, who supported the launch of his personalized Camillus tools by doing an autograph signing during the show.

Moreover, several new and existing customers visited the Camillus booth and immediately placed orders at the show. As a result, Camillus expects to see a significant sales increase for 2012.

When Acme United, late last year, announced an agreement to build and sell Camillus survival knives and tools, co-designed and promoted by outdoor adventurer Les Stroud, I thought it was a big event, now I know for sure it is.

Les Stroud is the star of the six-time Gemini-nominated hit TV series Survivorman, which is broadcast on the Outdoor Life Network (OLN) in Canada, Science Channel in the U.S. and Discovery Channel International. The TV series is licensed for broadcast in over 120 countries worldwide and became the highest rated show in history of both OLN Canada and the Science Channel U.S. Ratings in the U.S. alone have hit 2 million on individual episodes.

The Les Stroud knives and tools will be marketed under the Camillus brand and will be available in stores throughout Canada and the United States by June 2012. This is an ideal timing, as the fourth season of Survivorman, in which Les Stroud will use the new Camillus knives, will air in the summer of 2012.

Rick Constantine, the Vice President for Camillus, said that although last year’s SHOT Show was a big success, it was nothing compared to what happened this year (see photo below). People were lining up to see the Camillus knives and to speak with Les Stroud.

The annual Shooting, Hunting and Outdoor Trade (SHOT) Show is largest trade show of its kind in the world. Some 1,600 exhibitors from all over the world filled the Sands Expo and Convention Center in Las Vegas and received more than 61,000 visitors this year, which is a record.

This year’s show saw tremendous enthusiasm on the part of sellers and buyers. From the opening bell, buyers filled the aisles to review and order products. This was also the case at Camillus where several big name retailers signed contracts. The knives will be shipped in the upcoming months.

The people at Acme United did a terrific job of turning a bankrupt knife manufacturer into a well-respected brand with excellent products and booming sales.

Remember that for more than a hundred and thirty years Camillus was a synonym for the finest knives available, until it went out of business in 2007. Acme bought the brand names and intellectual property in a bankruptcy auction that same year and re-launched the brand only 2 1/2 years ago with zero sales.

Prior to its bankruptcy, Camillus was an $18 million business. Although it will take some time to reach that level again, I’m convinced that we’ll see Camillus take a significant step towards that goal in 2012.