Second Repeat Machine Purchase Order in One Week for EnWave

Last week, Natural Nutrition purchased its second nutraREV machine, and now Ereğli Agrosan, a Turkish company that produces high-value, natural products and derivative products for the food, cosmetic and health sectors, ordered an additional 10kW REV unit. The machine is scheduled for delivery in the fall of 2016.

Ereğli Agrosan purchased its initial 10kW dryer only two months ago. That unit will be started up later this month at the company’s facility in Istanbul, Turkey. The order for a second machine indicates that Ereğli has already attracted several potential customers, which have shown interest in its REV dried products.

So far, the food processor only did product development work on a 2kW lab-scale REV machine that it recently purchased from EnWave. Their technicians and scientists have been actively developing products on that small unit since March 2016. The samples produced on this machine were sent to potential buyers across Turkey and Europe, whom apparently were very satisfied with the products.

Most likely, Ereğli will commence by selling dried fruits, but also dried meats and cheese products seem to be popular amongst its potential clients.

With its favorable geographical conditions and climate, large arable lands, and abundant water supplies, Turkey is considered to be one of the leading countries in the world in the field of agriculture and food.

Turkey is the world’s 7th largest agricultural producer overall, and is the world leader in the production of dried figs, hazelnuts, sultanas/raisins, and dried apricots. In fact, the agriculture and food industries employ over a quarter of the country’s working population and account for 7.1 percent of the country’s GDP.

This bountiful production allows Turkey to maintain a significantly positive trade balance thanks to its position as one of the largest exporters of agricultural products in the Eastern Europe, Middle East, and North Africa (EMENA) region. Globally, Turkey exported 1,781 kinds of agricultural products to 190 countries in 2015, accounting for an export volume of USD 16.8 billion.

Ereğli Agrosan stands to benefit immensely from Turkey’s position in these industries. It has a very capable management team, with extensive knowledge and experience in financial management, international trade, marketing and operations management. Moreover, the company has many strong, existing relationships with businesses in the Turkish, European and Asian markets, which are seeking to source higher-quality, natural food products. It’s noteworthy that Ereğli has 5 sales people on the road to promote its REV dried products in these regions. 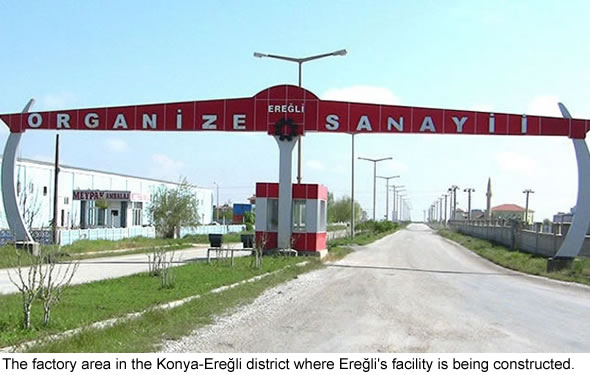 The license between EnWave and Ereğli Agrosan grants the latter the exclusive right to process a variety of fruits, vegetables and cheese products in Turkey using EnWave’s REV dehydration technology.

In order to retain its exclusivity for Turkey however, Ereğli must purchase at least four REV dryers on an agreed upon timeline.

The first 10kW commercial REV dryer was purchased two months ago. The second 10kW machine had to be purchased when the first one was installed. But Ereğli didn’t wait for the installation to be completed. Undoubtedly they noticed that the production from one machine wouldn’t suffice to meet demand.

Finally, Ereğli has also agreed to pay EnWave a quarterly product specific royalty based on the wholesale value of the individual product offerings. EnWave royalty streams typically range between 2% and 10%.

It’s great to see the second repeat order from one of EnWave’s existing partners. We suspect that we might see several more in the coming months as multiple companies are showing strong commercial success.

Milne Fruit Products, for example, a Washington based food processor, has been gaining traction with its MicroDried products and recently had to ramp up its production to satisfy significant orders from major food companies.

Also the 100kW nutraREV machine at NutraDried LLP, the 51% owned subsidiary of EnWave, is running at close to full capacity thanks to the continued success of Moon Cheese at Starbucks and at thousands of other retail stores across North America.

And finally, Bonduelle, the global leader in the production of vegetables, has launched its InFlavor dehydrofrozen vegetables early 2016, and is gaining lots of traction.

As Ereğli Agrosan is operating from Istanbul, the strategically located capital of Turkey, it easily can reach 1.5 billion potential customers in Europe, Eurasia, the Middle East and North Africa.

The agreement with Ereğli is potentially worth well over $2.5 million in machine sales alone. Knowing that a 100kW dryer generates between $200,000 and $400,000 in royalties per year at full utilization, it’s obvious that this could become a very lucrative deal for EnWave. Buy recommendation.