Early last year, EnWave Corporation (CA:ENW – $2.25 & US:NWVCF – $1.69 & GER:E4U – €1.53) achieved a breakthrough in Japan when the Company signed a Technology Evaluation and License Option Agreement (TELOA) with Calbee Incorporated. Using a rented machine, the multinational snack foods company began testing EnWave’s REV technology for the production of various healthy snacks. That testing process was successfully concluded this year as Calbee entered into a formal partnership to begin production. Calbee purchased a 10kW REV machine in May as part of that agreement. The unit has already been delivered and will be in operation later this month.

The emerging partnership with Calbee is of interest because it represents the first significant beachhead for EnWave within the important Japanese market place. To assist with the entire process, EnWave used the help of Tokyo-based Correns Corporation, which aims to bridge partnerships between Japanese and Western companies.

A thorough evaluation process was completed by Calbee prior to engaging in a business arrangement with EnWave. This is customary with Japanese corporate culture and part of the process to establish a new relationship. The careful and prudent investigation even involved several trips by Calbee personnel to visit the EnWave production facility. 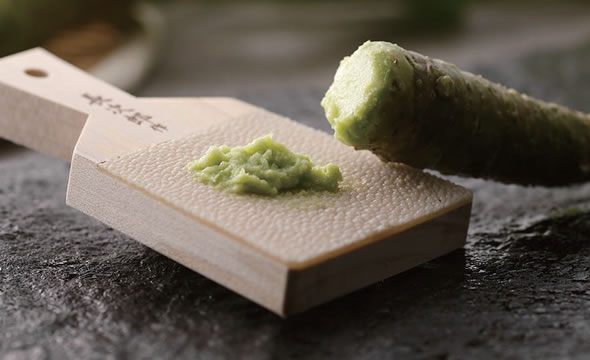 Situated in an agriculturally diverse environment, Kameya Foods has access to a variety of local, high-quality raw materials, which include some of Japan’s best-quality wasabi grown at the edge of Mt. Amagi (photo), fresh vegetables and seafood from Suruga Bay.

This week, a second Japanese company has entered into a partnership with EnWave. Kameya Foods Corporation has signed a royalty bearing commercial license to begin using the REV technology. Kameya has also submitted a purchase order for a 10kW REV unit to be installed at its main facility located in Shinshuku, Japan.

With its diversified product line of premium foods, Kameya plans to use the REV unit for the production of dried wasabi, fruits, tea and seafood. The performance advantage using REV technology for food processing has already been established by many other companies in this sector. The addition of Kameya to the roster of partners then builds on this successful market niche created by EnWave.

Kameya is recognized as an innovative pioneer with a very high standard for the creation of new products. The company has achieved the status as a specialty producer of exceptional food products for global markets. The choice to begin operations using REV processing is therefore an implied validation of the technology. Once again, REV processing is highlighted as the superior choice for the operations of the most quality-conscious industry partners. With its reputation for the production of premium food products, Kameya is an ideal client for EnWave to build its presence in Japan.

Similar to the arrangement with Calbee, formal introductions were first arranged by Correns Corporation for this new deal. This value of the alliance that EnWave established with Correns is once again paying dividends for its growth plan.

Kameya also committed to a thorough vetting process, again including sending representatives on several visits to inspect the Canadian facility. Recall that EnWave was required to navigate even greater scrutiny prior to advancing its arrangement with the United States Army Combat Capabilities Development Command Soldier Center. That EnWave is able to surpass even the highest scrutiny protocols is a feather in the corporate cap. It demonstrates that the Company is well run with the capacity to achieve superior operating standards demanded by its partners.

Every new sales agreement is an important event for EnWave in its longer term goal of commercializing REV technology worldwide. The popular product line marketed by Kameya will generate a profitable royalty revenue stream to EnWave. This deal also advances the objective to expand its business activity within Japan. The country is recognized as one of the most difficult markets for foreign corporations to become established.

The powerful alliance with Correns Corporation is also an asset in this sales process. There is the potential for subsequent sales agreements in the pipeline as other Japanese companies are currently involved in discussions.

With this one deal therefore, EnWave has advanced towards its overall corporate objectives to achieve sales growth, to build greater diversification among different industries and sectors using the technology, and to achieve expansion of its technology throughout the most important worldwide markets. Recurring announcements of key partnerships with companies like the Kameya are another reason why EnWave has maintained its leadership among the top small cap growth stocks in Canada.