In 2011, Globex carried out a diamond drill program on the property consisting of 27 drill holes totaling an aggregate of 3,100 metres. A portion of the drill program was devoted to an area with historical indications of copper, zinc, gold and silver mineralization. Significant base and precious metal mineralization was discovered with some holes returned exceptional values.

Osisko’s land position covers volcano-sedimentary Archean greenstones that host a number of known gold showings that are of strong exploration interest to the company.

“The acquisition of the land package strengthens our position in this region and is consistent with our strategy of controlling significant land positions in the Abitibi where we believe Osisko will unlock the exploration potential and develop the next generation of Canadian gold mines.” said John Burzynski, Osisko’s President and Chief Executive Officer.

Globex has recently applied for a drilling permit to drill two holes at Tonnancour on priority geophysical anomalies. Of course, thanks to Osisko’s activities, there may be renewed interest in the Tonnancour property. In that case, Globex could option the property to another exploration company. 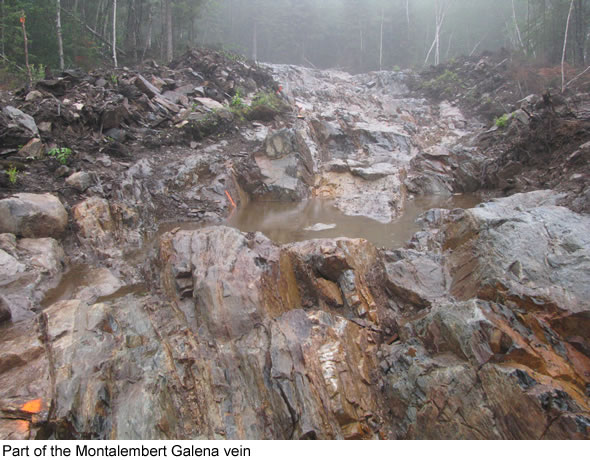 In 2015, Globex acquired a 100% interest in the property by staking, after which Globex undertook a program of stripping, detailed mapping and geophysics. The following year, a total of 208 channel samples were collected. Numerous anomalous gold values were received from the vein systems with the best assays listed below.

*Note that the assaying process originally employed was the widely used – and industry standard – fire assay technique. However, this method doesn’t perform well with high nugget effect samples, as it is often the case at Montalembert. When visible gold is observed, or when high grade gold is suspected, the metallic sieve method is a preferred assay technique.

Even considering the erratic gold distribution observed on surface as is common when exploring coarse gold, the channel sampling succeeded in confirming a significant set of gold bearing vein systems.

Enforcer Gold is earning a 100% stake in the 7300-square hectare Montalembert project. In order to do so, Enforcer is required to:

EnerSpar Corp. (TSX-V: ENER) (formally Walmer Capital Corp) has closed its qualifying transaction, which is the acquisition of the Johan-Beetz feldspar property in Southern Quebec.

A Capital Pool Company (CPC) is a new, fledgling company trading on Canada’s TSX Venture exchange that has no commercial operations and no assets except for cash. It uses its cash holdings to evaluate promising businesses or assets that it would acquire in a Qualifying Transaction, which it has to complete within 24 months of listing. The completion of the qualifying transaction would enable the CPC to list as a standard Tier 1 or Tier 2 issuer on the TSX Venture exchange.

Globex acquired the Johan-Beetz feldspar property by staking in 2015. It includes a currently disused loading dock which extends into the river from the property. It was used in the 1950’s by Spar‐Mica Ltd. to facilitate bulk feldspar shipments. The property’s location with direct river access is a significant advantage as transport is a major cost to potential bulk feldspar buyers.

Spar-Mica spent several million dollars on a new and innovative electromagnetic separation plant at Baie Johan-Beetz. However, due to contamination and technical problems, the plant was shut down in 1959 after only three years of operation.

25,000 tons of feldspar-quartz concentrate were produced and shipped but a total of 150,000 tons was mined from 6 quarries at the site. A historical open pittable resource of 30 million tons has been reported.

The term feldspar encompasses a whole range of materials. Feldspars are primarily used in industrial applications for their alumina and alkali content. Most of the products we use on a daily basis are made with feldspar: glass for drinking, glass for protection, fiber glass for insulation, the floor tiles and shower basins in our bathrooms, and the tableware from which we eat. Feldspar is part of our daily life.

A technical report for the Johan Beetz project recommends a $450,000 exploration program for the first year. This work would include a shallow 60-hole drill program. Following two private placements in which EnerSpar raised $867,500, it has enough money to spend on exploration work.

In August 2016, Globex optioned the property to EnerSpar. Under the agreement, EnerSpar will pay Globex $100,000 and 2 million shares of EnerSpar to earn a 100% interest in the property. The agreement also provided for a 2% Gross Metal Royalty payable to Globex.

Note that the EnerSpar shares will commence trading on the TSX Venture Exchange under the EnerSpar name and ticker symbol “ENER” upon the opening of the markets on April 3, 2017.

Glenn Kasner, President of RJK Explorations Ltd., commented that, “Management is very encouraged by this first phase of drilling at Maude. It demonstrates the high-grade nature of the “5 Zone” and I believe with additional drilling, the historic resource estimate can be confirmed and brought up to current standards for resource reporting. But, I believe the real potential lies with down-plunge drilling below the 300 metres level where historic drilling has returned such intersections as 19.54 g/t gold over 8.08 metres at the 375m level and 12.34 g/t gold over 2.53 metres at the 475m level.”

Late May 2016, Globex signed an Option Agreement with RJK, under which the latter may earn a 100% interest in the Maud Lake Property by making ongoing annual payments of $250,000 and reserving a 2.5% Gross Metal Royalty for Globex, 1% of which may be purchased for $2 million.

Activities at Globex Mining are booming. The Company itself is advancing several of its properties, while option partners are doing the exact same thing.

This is excellent for Globex as it receives option payments, shares from partner companies which it can sell, and potentially royalty income when a project is brought into production.

The fact that Globex makes money, sets it apart from a large majority of resource related companies. In strong years, it generates a fair amount more than what it spends. This to a large degree explains the small number of shares that have been issued as in large part Globex finances its exploration and acquisitions from revenue.

Based on the solid outlook for commodities, we expect that Globex will experience much more optioning activity the coming quarters. Recommendation BUY.