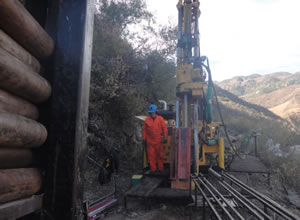 During the first half of 2012 NSX Silver completed a 16-hole drill program, totaling 3,530 meters, as a first step towards establishing a comprehensive geological model for Dios Padre. Ten of the holes targeted the area in and beneath the historically mined Santa Gertrudis open pit.

The Dios Padre property has a long and vivid history as a high grade producing open pit mine. Sixteen million ounces of silver is reported to have been mined between the early 17th century, which were operations directed by Jesuits, and more organized mining efforts under L.V. Limited between 1860 and 1910.

These ten holes encountered mineralized zones that contained silver mineralization intermixed with a variety of sulfide minerals. Of these, three holes were drilled into the old mine workings, and seven holes were focused on new prospective targets below the historic workings. Assay results from these deeper holes reported anomalous silver and gold values throughout much of their length as well as thicker zones of higher grade material.

Of significance is the fact that silver mineralization occurs in both the rock matrix and within vugs (cavities) and fractures in rhyolite and rhyolite breccia host rock rather than in discrete veins. This reinforces expectations of the potential for additional higher grade mineralized zones below the known historic mine workings and within the feeder stock that appears to trend to the north-northeast of the Dios Padre Breccia zone.

Remember that the Santa Gertrudis silver deposit is hosted inside a breccia pipe, which is a volcanic structure that intrudes into surrounding rock. Meaning that the structure extends deeper where there’s potential to find more valuable metals.

Also of importance was the fact that several holes encountered significant zones of mineralization at or near surface. This could lead to a large lower grade resource near surface, which could potentially support a low cost open pit or bulk mining operation.

After analyzing all the 2012 results, along with drill results from previous owners, the Company initiated the Phase II drilling program at Dios Padre with the objective to

NSX Silver’s geologists are currently reviewing and analyzing all data generated from this program together with data collected from the Phase I program and from the historic exploration programs. Based on all that information, the geological model of the property will be updated and a new resource estimate will be prepared.

Furthermore, a Phase III drill program will be discussed and planned, in which the Huerigo and other anomalous zones on the Dios Padre property will also be evaluated for potential drilling.

NSX Silver showed some good drill results from Dios Padre. Unfortunately the market seems indifferent these days to whatever news a resource company announces. One thing’s for sure though, the market moves in cycles and will rebound all over again. It’s always been, and will remain, that way.

So make sure to position yourself in a few juniors which continue to develop their properties even in a downturn and which are run by managements that have gone through these cycles before and know how to respond to them. NSX fits that description.