First, a piece titled “Cleaner Oil Sands…A New Extraction Process…” appeared in a special “The Year Ahead” Energy section of Bloomberg’s Business Week print and online editions. The article focused on MCW’s average production cost of $35 USD per barrel as compared to the much higher average cost of crude oil.

And a couple of days later, an article was published by CBS Money Watch, titled “A Cleaner Way To Get Petroleum Out of Oil Sands“, which describes MCW’s unique oil sands extraction technology.

Thanks to all the media attention, the Company’s stock price skyrocketed in a matter of days from $0.90 to a high of $1.70. Since then, the stock backed off to $1.18, which is still 40 percent higher compared to when we first featured MCW mid-October.

MCW’s initial extraction plant was unveiled in Vernal, Utah on October 1st, 2014. It uses a patented, environmentally-safe, continuous flow closed-loop technology, which extracts oil from a wide range of oil and other hydrocarbon sediment types. It can be effectively applied to both “water-wet” deposits, such as the oil sands projects in Alberta, Canada, and/or “oil-wet” deposits such as the resources typically found in Utah. 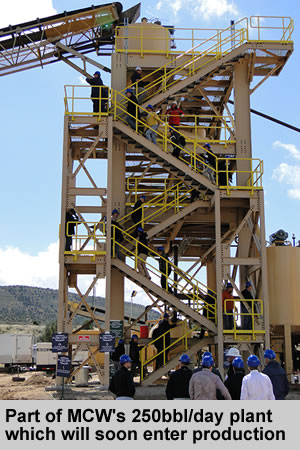 The technology utilizes no water during the process, which is a key advantage when applying it to the western desert states in the U.S., where water is widely unavailable. The process produces no greenhouse gas, requires no high temperatures or pressures and is capable of extracting 99% of all hydrocarbon content.

The process involves the use of harmless, benign solvents, which remain within the closed-loop system. After the extraction process is complete, the solvents are recycled and re-used. The purified sand is removed from the system and can then be either sold as clean sand or replaced back to its original location.

Since the plant was unveiled, it has successfully undergone a series of tests, it has been winterized for year round operation and it received all the necessary operating and environmental permits to start commercial production. This will be initiated shortly, after which 250 barrels of oil per day will be produced and sold at a small discount to the West Texas Intermediate (WTI) crude price. Agreements with a local distributer have already been signed.

MCW built its plant on a leased property in Asphalt Ridge, Utah. Although this project contains lots of oil, the sands to feed the plant, are being truck hauled from a nearby property called Temple Mountain, which is owned by TMC Capital, a private company. The reason being is that Temple Mountain was granted one of only two large mining permits in the state of Utah.

Because access to the Temple Mountain oil sands and its mining permit is critical to MCW, it entered into an agreement with TMC Capital to acquire the property. MCW will pay $10 million in cash and it will issue 10 million common shares to TMC. In addition, MCW will assume TMC’s obligation to a 1.6% gross royalty held by the owner of the property.

In order to acquire Temple Mountain, MCW will need to raise $10 million. In recent weeks the Company issued a convertible secured note to an institutional arm’s length lender for an amount of US$1,111,112. The Note bears interest at a rate of 5% per annum, is payable quarterly and matures on May 5, 2016.

At the option of the Lender, principal under the Note is convertible into units of MCW at a conversion price of CDN$0.90 per Unit. Each Unit would consist of one common share in the capital of MCW and one common share purchase warrant of MCW, which entitles the Lender to acquire one Common Share at an exercise price of CDN$0.945 per Common Share until November 5, 2019.

For many companies getting a 250 bbl/day facility into production would be an end point. MCW, however, only sees this as a stepping stone to a 5,000 barrels of oil per day facility. It recently announced the commencement of funding activities totaling $80 million USD for the design, fabrication and assembly of such a plant.

In order to augment its production revenue stream, MCW is now engaged in joint venture and/or licensing opportunities with companies based in countries with significant oil sands/shale deposits and has recently successfully tested oil sands feedstock samples from countries such as Canada, Asia and Jordan. It’s important to keep in mind that oil sands aren’t just found in Utah and Canada. Other large reserves are located in countries such as Kazakhstan, Russia and in several African countries.

MCW’s unique environmentally-friendly, closed-loop extraction technology requires no water, no high pressures or temperatures and features minimal infrastructure costs. It’s clear this is a much sought after technology that can be applied in countries all over the world in the billion dollar oil industry.

Make sure to check out MCW’s excellent YouTube video on its technology and facility.