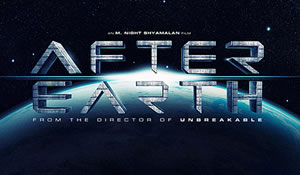 Les Stroud, co-designer of Camillus survival knives and tools, skilled Will and Jaden Smith on real life survival techniques for their new movie After Earth.

Starting May 31st, After Earth, a science fiction action movie staring real-life father and son Will and Jaden Smith, will air in theatres.

Very interesting to know is that Les Stroud, who co-designs and promotes a series of Camillus survival knives and tools, was the survival expert for the movie, teaching both Will Smith and his son on real life survival techniques.

To help promote After Earth, Les Stroud hosts a 7-episode web series inspired by themes from the upcoming action movie, in which he uses a Camillus Arctic knife. In the series Les Stroud takes on challenges inspired by the film, such as overcoming extreme hunger, combating dehydration, and surviving freezing temperatures.

In After Earth, a crash landing leaves teenager Kitai Raige (Jaden Smith) and his legendary father Cypher (Will Smith) stranded on Earth, 1,000 years after cataclysmic events forced humanity’s escape. With Cypher critically injured, Kitai must embark on a perilous journey to signal for help, facing uncharted terrain, evolved animal species that now rule the planet, and an unstoppable alien creature that escaped during the crash. Father and son must learn to work together and trust one another if they want any chance of returning home.

Who could have known that when Acme United (ACU – 12.65) signed an agreement with Les Stroud, the star of the six-time Gemini-nominated hit TV series Survivorman, late 2011 to co-design and promote a new line of Camillus survival knives and tools, it would have become such a success.

The initial four Les Stroud knives, the so-called Signature Series, were introduced in January of 2012 at the SHOT Show in Las Vegas. It was a successful event as several new and existing customers visited the Camillus booth and immediately placed orders. As a result, they were broadly distributed throughout the United States and Canada mid last year, which was an ideal timing as the fourth season of Survivorman, in which Les Stroud used the new Camillus knives, was aired around that time.

At this year’s SHOT Show a new series of Les Stroud knives was introduced and received with enthusiasm.

Also noteworthy is that Acme United’s relationship with Les Stroud has expanded beyond knives, as several new survival kits will be launched shortly under the Les Stroud name.