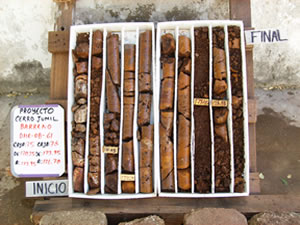 Drill core from Cerro Jumil. This core is part of a 21 meter interval that averaged 2.1 grams Au per tonne.

New analytic drill results from Esperanza Resources’ (EPZ – $1.40) 100% owned Cerro Jumil gold/silver property in Mexico indicate gold mineralization at the Southwest Extension area. After initial drill results from the Las Calabazas zone showed gold presence in December of 2011, this is another zone which expands the current mineralized area of Cerro Jumil (see table and map below).

This is good news, not only because it should lead to increases in the resource estimate of the property, but also because it indicates that the Company’s geologic model of Cerro Jumil is correct. That’s important as it helps the geologists determine where to drill next.

Based on the above resource estimate, a Preliminary Economic Assessment (PEA) from September 2011 showed that Cerro Jumil is a typical open pit, heap leachable mine with an estimated average production of 103,000 ounces of gold per year, which can be mined at $499 per ounce. The PEA estimates that, at a very conservative gold price of $1,150 per ounce, the project has an after tax Net Present Value (NPV) of $122 million at a 5% discount rate generating an Internal Rate of Return (IRR) of 26%.

Two drill rigs are currently active at Cerro Jumil to both upgrade the inferred resource by infill drilling and to expand the resource with step-out drilling, for example on the Southwest extension area. An updated resource estimate, which will include all the new analytic drill results, is expected in the second half of 2012.

The drills are also employed to collect large diameter core from various locations and depths of the deposit for metallurgical testing. McClelland Labs will first conduct bottle-roll tests, after which the lab will build columns from bulk surface samples and large diameter core samples to test the gold recovery by cyanide leaching.

A cyanide bottle roll test is the first step in assessing the gold recovery by cyanide leaching. During a bottle roll test, prepared ore is gently agitated in a cyanide lixiviant or leaching solution. Oxygen levels, alkalinity, acid consumption and other parameters are monitored and strictly controlled throughout the test. Test results provide information on expected recovery rates and reagent costs.

Esperanza also wants to have a Bankable Feasibility Study completed by the end of 2012. Such a study is necessary to attract debt providers and other investors who will finance moving the project into production. It includes an estimate of ore reserves; description of the suggested methods of breaking, haulage and extraction; description of proposed processing and waste disposal; an economic evaluation including an estimate of the capital expenditure requirements and operating costs and a comparative analysis of the effect of various assumptions, financing costs, operating costs and taxation; and an estimate of operating levels, environmental costs, shutdown and reclamation costs.

Instead of finishing the Bankable Feasibility Study first and then presenting it to potential bankers, Esperanza has taken a somewhat different route. It has already initiated talks with non-equity capital providers with the aim of awarding the Lead Arranger mandate in the second quarter of 2012. This will allow the Lead Arranger an early review and participation in the feasibility study, which will expedite the financing process afterwards.

In our December 3, 2011 article, we wrote that if mineralization is found in the Southwest Extension area, it would be a another major step forward for Esperanza. The latest drill results confirm this is the case.

Cerro Jumil currently has a resource estimate of 1.2 million gold equivalent ounces. Based on the drill results that have already been announced and the potential of the Southwest Extension area, it’s safe to assume that an updated resource will be close to 2 million ounces.

With approximately $18 million cash in bank plus another $13 million in marketable securities, Esperanza also has enough money to fund its plans for Cerro Jumil in the foreseeable future without the need for an additional financing.

We will soon conduct an audio interview with Mr. Bill Pincus, the President and CEO of Esperanza Resources. If you have a question for to include in the interview, feel free to let us know. Shortly after the interview, we’ll publish an updated Company Report.