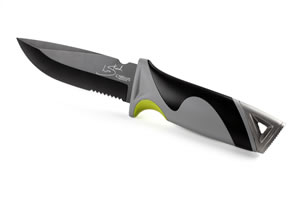 The SK Mountain fixed blade knife, made out of titanium bonded stainless steel, is one of the Camillus knives from the Les Stroud signature series.

Last month, Les Stroud supported the launch of his personalized Camillus knives by doing an autograph signing at the SHOT Show in Las Vegas. Knife World, one of the leading magazines for knife enthusiasts, took advantage of this opportunity to interview the star of the six-time Gemini-nominated hit TV series Survivorman. The result is a 5-page interview with Les Stroud in which he talks about his live, survival and of course the new Camillus knives that bear his signature.

At Acme United (ACU – $10.02), the owner of the Camillus brand, everybody is excited about the new knives and in full preparation to deliver them to the first customers.

In the interview, published in the March 2012 issue of Knife World, which is now on newsstands, Les Stroud opens up about how knife companies started to approach him with proposals when his survival show took off. He explains that none of those proposals were the right fit until Camillus came calling with plans for a larger project.

Mr. Stroud says that he was involved in every step of the design process. He told the technical people at Camillus what requirements the knives had to meet in terms of design, usability and comfort. And each time a prototype was ready, he took it outside to test. Only after several of these cycles the designs were finalized. He added that a survival knife has to help you to survive and that he wanted to make sure these knives did exactly that, without compromises.

At this moment, the Les Stroud Signature knife family consists of four knives: The SK Arctic has a mid-sized fixed blade, the SK Mountain has a somewhat larger and partially serrated fixed blade, the SK Desert is a mid-sized folding knife and finally the SK Jungle is a large machete knife. More survival tools will be launched in the coming months.

The Les Stroud knives and tools will be marketed under the Camillus brand and will be available in stores throughout Canada and the United States by June 2012. This is an ideal timing, as the fourth season of Survivorman, in which Les Stroud will use the new Camillus knives, will air in the summer of 2012.

Because the TV series has up to 2 million viewers in the United States alone, it’s no wonder why several new and existing customers visited the Camillus booth at the SHOT Show and immediately placed orders.

Find out more about Camillus Knives at CamillusKnives.com.