Perhaps the most noteworthy of these news items this week highlighted additional encouraging assays results reported by Maple Gold Mines Ltd [MGM]. Maple has been actively exploring to establish new gold resource zones at its core property holdings, including the Eagle Gold Mine project under option from Globex. Recent drilling at the Eagle Gold Mine property encountered a new gold horizon running parallel to the established Eagle-Telbel gold mine horizon.

This week, another batch of assays was presented by Maple from four more drill holes directed at this target. The results confirmed the attractive gold values reported earlier this month. Results included a higher grade section spanning 7.5m of core was mineralized with an average of 4.0 g/t gold. In another drill hole, an intersection of 10.4m was mineralized with an average grade of 2.3 g/t gold. These results are from mineralization that is located close to surface and in proximity to previously defined gold deposit zones of the historic mine workings.

The successful exploration so far has confirmed the geological model for the project developed by Maple. This suggests that a much larger overall gold resource may ultimately be revealed as further drilling XXXXX continues. With the prospect to expand the gold resources, this in turn improves the outlook that mining activity may resume at the Eagle Gold Mine project. Maple has committed to a series of cash and share payments to Globex as part of the transaction to acquire the project. Positive results are therefore directly beneficial to Globex. The Company also retains a 2.5% Gross Metals Royalty (GMR) on the project.

Among the other encouraging news items this week, Emperor Metals [AUOZ] has now closed the first tranche of a previously announced financing to raise more than $2.3 million. This is part of the option deal to acquire 100% ownership of the Duquesne West-Ottoman announced in October. Globex shall also be paid significant share ownership of Emperor as well as cash and a royalty and remain leveraged as its partner fully funds aggressive exploration activity at the project for several years of work programs.

Another junior explorer, Cartier Resources Inc. [ECR], has reported assay results from drilling completed at the West Nordeau Deposit. A promising section of one meter grading 9.56 g/t gold was presented as part of a larger 4.6m interval with an average grade of 3.3 g/t gold. The gold zone was encountered approximately 800m below surface, downdip of the established deposit area. Cartier has planned further drilling to follow up on this successful result with the objective to expand on the previously estimated Indicated resource of 311,000 ounces of gold. Globex retains a 3% GMR on the West Nordeau deposit area.

Sayona Mining [SYA] announced that it has received the final permit from the Quebec government that is necessary to resume operations at the North American Lithium Operation. Production of lithium is slated to begin in the first quarter of 2023 and this is very good news for Globex shareholders, as Globex retains a 0.5% GMR on the Authier, Sayona owned, open pit lithium deposit . In addition, Globex controls a large share position of Electric Royalties [ELEC] which also holds 0.5% GMR royalty leverage for this project. Following the successful commencement of production, recurring royalty payments are due for the lithium extracted at this mine. This double-barrel royalty leverage to North American Lithium (Sayona) will build value for Globex shareholders.

A long delay awaiting assay results from a summer drilling program has been resolved for Imperial Mining Group Ltd. [IPG] This week Imperial reported promising scandium values from its Crater Lake scandium project. Among the highlights, the company has achieved the discovery of a new, higher-grade scandium-bearing horizon. This second zone is oriented parallel to the primary mineralized zone identified in previous drilling. More importantly, the new zone demonstrates continuity of grade across significant drill core widths. The enriched zone remains open to the south with the potential that other mineralized zones will be encountered to depth and closer to surface as further drilling is completed.

Assay results were reported for the final three drill holes from the summer program. The best interval was a section of 24.68m of core with an average grade of 247 g/t scandium plus 0.482% total rare earth elements and yttrium (TREO + Y) that was encountered nearly 113m downhole. Another notable interval of 25.77m was mineralized with 202 g/t scandium plus 0.506% TREO + Y. For comparison, the grades presented in this report would be roughly equivalent to achieving a discovery of 7.5 – 9.9 g/t gold based on recent spot prices for the metals.

This success achieved by Imperial is of interest to Globex shareholders for the leverage to the adjoining Crater Lake South property controlled by the Company. 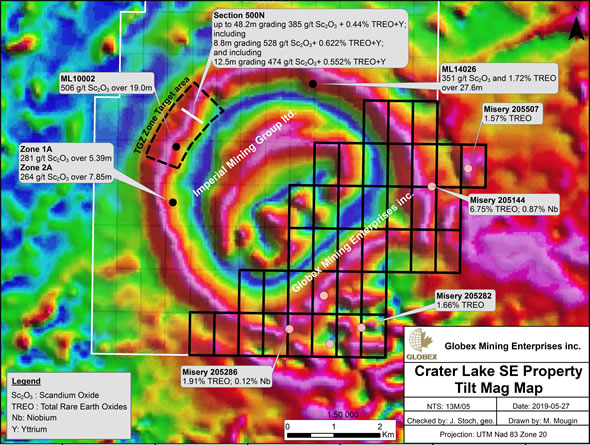 Globex owns the Southeastern portion of the Crater Lake property, while the Northwestern part is controlled by Imperial Mining Group

Globex was awaiting results from Imperial proceeding independently to the north. The positive assay results and enriched scandium grades from a system open to the south at the neighboring project area builds speculative interest for the southern claims held by Globex.

The Globex royalty portfolio is frequently highlighted as a value proposition and rightly so. The pending cash royalty stream that will be payable next year if the North American Lithium mine (Sayona) resumes production, will contribute significant revenues to Globex once they start to mine the Authier Lithium Deposit. However, the impressive portfolio of shares of partner companies, accumulated through numerous transactions, also represents a valuable component of the working capital position. Note that Globex holds 706,714 shares of Yamana Gold Inc. The value of Yamana shares has been increasing recently such that this one holding is now worth $5,279,150.

Shareholders may anticipate that several other minority share ownership positions controlled by Globex, including the substantial holdings of Maple Gold Mines, will gain in value as successful exploration activity continues at various projects. The frequent updates provided by Globex, documenting the progress of transaction and royalty partners, is thus a snapshot of the longer-term advancement that may ultimately generate much greater shareholder value.

Not to be overlooked, Globex controls a vast inventory of wholly owned land positions such as the Crater Lake South property in Quebec. These properties may become of greater interest for a potential transaction as other projects in close proximity advance independently. With access to a lavishly funded treasury, Globex also has the option to proceed with proprietary exploration ambitions to advance prospects and participate directly from discovery success.

As the year winds to a close, the most speculative window for junior exploration stocks draws near. Globex shares soared roughly 50% during this time frame last year. With so many active projects advancing by partner companies, the outlook remains extremely bullish for Globex shareholders. Smallcaps Recommendation: BUY.