With a diversified suite of property holdings that includes more than 160 separate resource prospects it is no surprise that Globex Mining Enterprises Inc. (TSX:GMX – $0.43 & OTCQX:GLBXF – $0.33 & Fra:G1MN – €0.26) issues a regular stream of news reports. This week the Company released two important updates that are of interest.

The first of these on December 5th related to the completion of a small flow-through (FT) equity offering, amounting to the issuance of 846,153 FT shares for net proceeds of $550,000. The FT classification generates a tax deduction that enables qualified participants to write off over 100% of their investment cost against tax obligations. This is attractive to speculative investors that desire a lower tax payout during the year the offering is issued, and as a result FT deals may be marketed at a premium to the market price at the time it is announced but rarely at the markup to market that Globex achieved.

This FT deal was arranged at a price of 65 cents per share, representing a premium of 55% above the market price for the stock. Presented another way, the company was able to issue fewer shares using the FT approach, and therefore it resulted in a lower dilution of the outstanding shares. Following the placement, the company continues to maintain a tight share structure, with about 54.1 million shares on a fully diluted basis. In fact, the fully diluted share position will reduce by over 2 million as warrants expire.

On December 6th, Globex followed up with an update on exploration progress at its 100% owned Francoeur/Arntfield gold project, located in Quebec, near the significant mining center of Rouyn-Noranda. This is an advanced project, with an extensive exploration history, previous mining activity, and an established both historical and NI 43-101 gold resources. This news focused on assay results from recently completed surface sampling, and a shallow drill hole program.

Recall that in September Globex announced results from a series of trenches that targeted a significant shear zone. The Francoeur-Wasa Shear is the dominant structural feature extending through the property, and is associated with no fewer than six historic gold mines in the district. A secondary “South Shear” has been identified at the property, running south and parallel to the Main Shear.

Assay results from sampling of the South Shear indicated an intriguing high-grade area at the southern-eastern most section of the channel sampling program, with an interval of 15.33 g/t gold encountered over 1.1 meters part of channel sampling results averaging 9.52 g/t gold over 7.1 meters, among several other highlight intervals.

The most recent drilling work reported this week was a follow up to the September trenching work. Shallow drilling extended down to a maximum depth of about 40 meters. Several of the drill holes encountered gold values within 10 meters of the surface, including a 3.25 meter interval of 6.25 g/t, and a 7.34 section grading 4.04 g/t gold from the South Shear. Drilling continued through to the Main Shear zone, with one of the drill holes encountering 11.57 g/t gold across an interval of 2.2 meters. (Note: all widths are true widths) 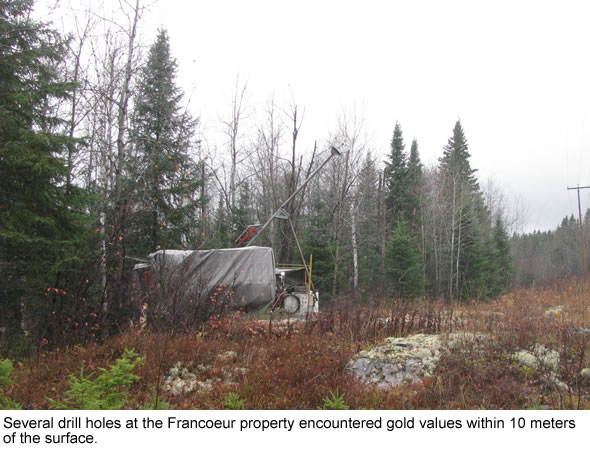 Trenching was also completed on the Main Shear, above where several drill holes traversed the shear. Best channel sampling results included 8.07 g/t gold over a 2m section and 5.36 g/t gold along 4.2m of channel sampling. Grab samples taken from old trenches approximately halfway between the intersections on the Main Shear returned gold assays of 9.53 g/t, 10.18 g/t, 10.15 g/t, and 6.73 g/t.

While the two combined rounds of work from the Fall Program have been successful to outline excellent gold showings and increase the footprint of the deposit area, the results also serve to demonstrate the complex geology of the region. The same intense geological processes that created the ideal conditions for emplacement of gold have also contributed to displacement and deformation of the host rock. For geologists, the difficulty lies with interpreting the geometry of the productive structural zones, and intersecting these target areas as work proceeds further to depth.

It is notable that these positive results were generated from a very small portion of the property area. The new zones remain open with expansion potential to depth and laterally. And numerous other gold zones and mineralized areas remain to be tested elsewhere on the property.

The focus on exploration at Francoeur/Arntfield has been of greater importance following the recent acquisition of the Dickenson Property, a package of three adjacent mining claims. This additional property area, totaling more than 211 hectares of surface holdings, is of interest because it includes an extension of more than 1.5 kilometers of the Francoeur-Wasa fault.

In addition, Globex has acquired data assembled from work completed by previous operators of the project that will be useful as the Company moves ahead with further exploration work. This includes drill core data from where numerous gold showings were encountered. Taken in context with the overall exploration results from the Francoeur/Arntfield property, this affords Globex a head start to create an advanced exploration model for the entire ownership block, and plan a comprehensive strategy to move the project further along the value curve.

Globex Mining Enterprises Inc. may be considered to be a hybrid junior resource company. Like most junior explorers, the company controls attractive properties with the potential for exploration and discovery. This in turn creates asset value for shareholders through the leverage to potential sale or development as resources are established.

However, exploration work is costly and carries the risk of an uncertain outcome. Offsetting this, Globex also operates as a project generator. The large suite of property interests, located in safe mining-friendly jurisdictions, may be offered to other resource companies. Property transactions granting control of specific properties are arranged in exchange for cash and/or share payments, plus certain work commitments. These deals provide shareholders with leverage to potential discovery success paid for by other companies, and therefore serve to lower the risk profile.

In addition, the Company offers a measure of stability through the generation of revenues from an ongoing royalty stream, and occasional property transactions. Pure royalty companies tend to trade for premium market value due to this recurring revenue potential and lower overall risk level.

Taken as a whole, Globex offers a diversified strategy to build resource leverage and mitigate funding issues that are common among the resource companies. This profile is attractive to investors and beneficial during the times when the Company opts to raise additional funding through equity placements.

The success it has been able to achieve at high priority property holdings, such as at Francoeur/Arntfield, is yet another iron in the fire with the promise to increase shareholder value, and ultimately a catalyst to support a higher market value for the stock as the project is advanced with further work. Recommendation: Buy