The survey covered the entire Ontario Lake property of about 2,202 ha with the objective of locating areas of higher magnetic signatures which may indicate the presence of ilmenite. Although ilmenite itself isn’t magnetic, samples display mild magnetism. This is probably caused by magnetite associated with the ilmenite.

Ilmenite is an ore of titanium dioxide (TiO2), which is used in paints, fabrics, plastics, paper, sunscreen, toothpaste as well as certain foods and cosmetics. Currently, TiO2 pigment is priced at around US$4,000 per tonne. Prices are expected to rise, as major TiO2 pigment manufacturers, such as Huntsman Corp., Kronos, Tronox and Crystal have already informed their customers about additional price hikes in 2017. 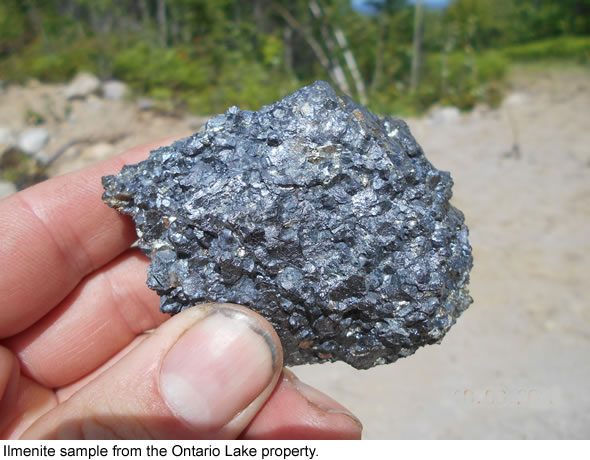 Although the Ontario Lake property had little or no exploration undertaken on it, historical literature reported a massive, granular, black ilmenite area that averaged 38.97% Fe and 37.1% TiO2.

Shortly thereafter, a Globex geologist and a prospector located a 15m by 7m outcrop on the eastern bounder of the property (see map: number 1 in blue) with an exposed height of up to 2 metres from which the initial grab sample was taken. The outcrop was found to be composed of massive to semi‐massive ilmenite. Several samples were again taken from this area and assaying showed the following high grade results:

In addition, exploration had located a large amount of ilmenite bearing glacial debris adjoining the southern boundary of the property (see map: number 2). Several of these boulders were also sampled.

As soon as the snow is gone, Globex plans to undertake a detailed program of prospecting and mapping in the area of the magnetic anomaly and will, based upon the program results, undertake stripping and/or diamond drilling in priority areas.

Alternatively, now that the large magnetic anomaly has been discovered, there might be some interest from other resource companies to option the property.

Noteworthy in that regard is that the Ontario Lake property is surrounded by a large package held by Vior Exploration Society, which has optioned the property to Iluka Resources Ltd. (ASX: ILU), the world’s largest producer of TiO2. In the past, Vior has flown magnetometer surveys over much of their property, completed selective gravity surveys as well as prospecting, geological mapping and trenching, channel sampling and analysis. Iluka’s exploration budget for 2017-2018 is $2,100,000.

The large magnetic anomaly discovered in the current survey, opens up new possibilities for Globex. The Company will soon start additional work on Ontario Lake to potentially increase its value further, or it might option the property to an interested third party.

The current market situation is also ideal as titanium dioxide is in high demand by several industries and its price is rising.

This is only one of close 150 properties that Globex currently holds in its portfolio. Recommendation BUY.