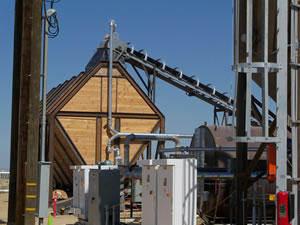 Part of the Greensteam demonstration unit that entered the final phase before its 30-day continues test.

After planning and constructing the ¼ scale demonstration plant, located at Aera Energy’s Belridge oilfield, it was fired up for the first time late 2010. The Company’s engineers and technical staff gathered a tremendous amount of data during that period. Based on that information, process adjustments were made to the Greensteam unit to significantly improve its performance.

Remember that a demonstration unit had to be built and that a 30-day continues test run had to be performed to prove that steam can be generated economically and efficiently and to measure the emissions in order to secure a air quality permit from the San Joaquin Valley Air Pollution Control District.

After implementing all modifications, it was started up again late June. It first ran 7 days on natural gas and then residual woody agricultural biomass was introduced in the system. The entire operation ran on biomass for more than 24 hours consecutively and produced steam at a 100% rate, as defined by the Aera-specified performance test criteria (the actual capacity of the Greensteam unit is higher).

The Company had invited a few third party observers and they commented that the system operated very cleanly and smoothly.

After a controlled shutdown of the unit, Greensteam’s engineers made some minor adjustments and optimizations including software updates to the Greensteam servers which could not be made while the system was in operation.

Greensteam is in the process of resuming operations again and will operate on biomass for several days to tune for emissions performance, ascertain dryer performance parameters and confirm that all other system elements are robust enough for the 30 day test. Although the dryer is working as anticipated, it needs to be tested at different flowrates of biomass with differing moisture contents.

Basically, these are all the phases a new system installation has to go through. First building, testing and making coarse adjustments to get it operating. Then testing for longer periods of time and optimizing the process so it performs as planned.

This is very good news. The work that has been done the past six months, significantly improved the performance of the Greensteam demonstration unit and we now know the Company entered the final phase before the 30-day test. And outside observers were excited by what they saw.

Risks for (potential) Global Green investors continue to reduce as the Company moves towards its goal of finishing its 30-day test and proving that Greensteam is indeed revolutionary in terms of emissions and efficiency. It may all have taken a bit longer than anticipated, but I firmly believe today’s shareholders will be amply rewarded.