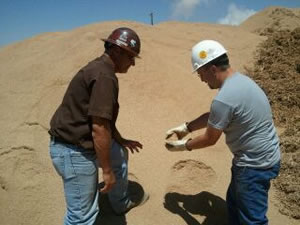 Global Green technicians inspecting the dried and processed biomass as part of the optimization process.

Global Green Solutions (GGRN – $0.08) has started the emissions optimization process of its Greensteam biomass-to-energy demonstration unit at Aera Energy’s Belridge oilfield. This is the last major task which needs to be completed before starting the 30-day performance test.

The last several weeks, the ¼ scale demonstration unit has continuously been producing steam firing natural gas. During that time, tests, calibrations and optimizations were conducted that only could be done while the unit was running.

The final box that needs to be checked off in this entire process is emissions optimization. This is basically the procedure where the Company’s engineers exactly determine the process parameters which produce as little emissions as possible. The settings are proprietary, but a key one involves air-fuel ratio.

I heard that very good progress has already been made on the emissions optimization procedure using natural gas, and that optimization using biomass is only a few days away. This is expected to go quickly as Greensteam handles natural gas and biomass in an almost identical way.

One or two smaller tasks will still need to be completed while firing biomass. For example, the automatic control of the biomass drying process has to be tuned. This is a process where the amount of fuel being dried and drying parameters are controlled by moisture analyzers, which measure the final dryness of the material. This is important because the biomass exiting the dryer must have a prescribed moisture content.

Things aren’t progressing as fast as us shareholders, and the Company’s management, had hoped, but we have to keep in mind that this is a first of its kind unit and that Global Green simply can’t afford to have a hundred engineers working on site.

The good news is that things are progressing. And, by far, the best news is that everything on the demonstration unit seems to function as intended and planned. That is the key to success.

By the way, when the start of the 30-day test is announced, Mr. Craig Harting, Global Green’s COO, and I, have agreed to conduct a new audio interview?