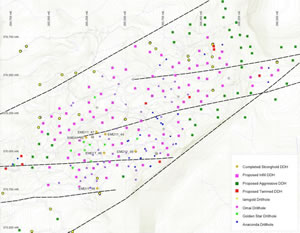 Stronghold Metals (Z – $0.35) announced impressive analytical results for 20 additional holes from its ongoing 15,000 metres drill program at the Eagle Mountain gold project in Guyana. Holes intersected mineralized veins with gold values between 0.5 and 9.1 grams per ton and as thick as 24 metres.

In total, ACME Analytical Laboratories Ltd has delivered results from 30 complete holes and 1 partial hole to date, totaling 6,017 metres. It’s very encouraging, and rare, that all these holes intersected gold mineralization of meaningful widths and grades (see table below). Even more intriguing is that 9 of these holes are step out holes, drilled outside the known mineral resource zone. Indicating that Stronghold will most certainly be able to expand its current NI 43-101 compliant resource estimate of 733,500 ounces of gold for Eagle Mountain.

The Eagle Mountain property comprises an area of approximately 5,050 Ha (12,480 acres) in central Guyana, about 200 km southwest of the capital Georgetown.

Since at least 1884, alluvial gold has been exploited in the Eagle Mountain area, from which total production is estimated at over 1 million ounces. Actual exploration work started around 1947, but it was only after Omai Gold Mines Ltd., which became part of IAMGOLD Corporation (NYSE: IAG) in 2006, acquired the project license that exploration work commenced in full.

In October 2009, an in-house technical report by IAMGOLD produced an Inferred Mineral Resources estimate of 733,500 ounces of gold, based on 197 drill holes, totaling 24,203 metres.

One year later, Stronghold and Omai Gold entered into an Earn-In and Joint Venture Agreement, whereby Stronghold was granted the right to acquire a 95% interest in the Eagle Mountain Property in return for a combination of cash, Stronghold common shares and work expenditures. The remaining 5% of the property is owned by the government of Guyana.

Mid April 2011, Stronghold commenced a new diamond drilling program designed to increase the size of the gold resource and to move a significant part of that resource from an inferred to an indicated category.

The program has the following objectives:

To date, 38 holes have been completed, representing 6,017 meters of diamond drilling. Results from thirty complete holes, including 9 step out holes, and one partial hole have been received from the lab with all of them intersecting gold mineralized veins. These results exceed all projections and expectations.

Drilling 31 holes and hitting gold in every instance is very exceptional. It confirms that Eagle Mountain is rich in gold and that gold veins extend beyond the historically known zones. More results are expected to be announced in the coming weeks and months from the Company’s ongoing 120 holes/15,000 metres drill program.

Currently, Eagle Mountain has a mineral resource estimate of 733,500 ounces of gold. Based on these first 30 holes, it’s safe to say that this estimate will be increased. If you haven’t bought shares of Stronghold yet, the current weakness in the market is an ideal time to do so.

Mr. Yannis Tsitos, the President and CEO of Stronghold Metals, conducted an update audio interview earlier this week. It can be listened to here.