The richest uranium mines in the world are located in the Athabasca Basin of Saskatchewan. Although the favorable geology of the district extends across a wide area, the key mineralized areas are concentrated along structural corridors. Fault structures serve as the paths for circulation of mineralizing fluids. Uranium is deposited in zones of hydrothermal alteration within the sandstone andreactive host rock at the unconformity horizon and to depth in the fault zones. As exploration activity has progressed through the region, geologists learned to focus on the structural breaks within the sandstone basin area and morte recently on significant structural target zones outside the current sandstone basin and beyond the main producing mines.

CanAlaska Uranium Ltd. (CA:CVV – $0.48 & US:CVVUF – $0.39 & GER:DH7N – €0.31) is an established uranium company with a number of large exploration projects and two Joint Vnetures in the heart of the Athabasca Basin,) Recently CanAlaska was drawn to investigate further along the main structural trends that support the mines in the northest portion of the Athanasca basin. The Company seized the opportunity to acquire additional property holdings and a staking program in 2020. These properties are being actively marketed for new joint ventures.

CanAlaska also has a promising land package in the eastern basin. The Waterbury project was assembled from three separate claim groups comprising more than 6000 hectares. The project is located on strike to Cigar Lake, a major producing uranium mine operated by Cameco Corp, about 12 kilometers to the southwest.

The Waterbury West claim was sold in 2016 to Cameco. CanAlaska retains a royalty on this portion of the property. Along with a cash payment, the transaction committed Cameco to complete exploration drilling at the property.. This week CanAlaska announced that a drill program has commenced, targeting the two remaining 100% owned claim groups comprising the Waterbury property.

Regional location map in the vicinity of Waterbury East and South.

Defined Targets at Waterbury Based on Scrutiny of Historical Exploration Data

A program of four drill holes is now in process, amounting to a total of approximately 1500m of drilling. This is planned to follow up on previously completed exploration in proximity to the current targets. At the Waterbury East claims a uranium discovery was achieved by CanAlaska in 2007. A drill hole encountered 17m of uranium alteration hosted within basement-rock formations. However, further evaluation of drill core interpreted that this hole may have undercut the primary unconformity target. Geophysical surveying has highlighted new targets where a higher grade uranium zone may be encountered.

Previous drilling work at the Waterbury South claims also encountered a favorable geologic setting for a uranium zone. Hydrothermal alteration was observed along with indicator minerals commonly present in uranium deposits elsewhere in the basin. This geological setting was also confirmed by a drill hole completed by Cameco roughly 1 kilometer further along the system. Broken rock and hydrothermal alteration was encountered at the unconformity target zone. 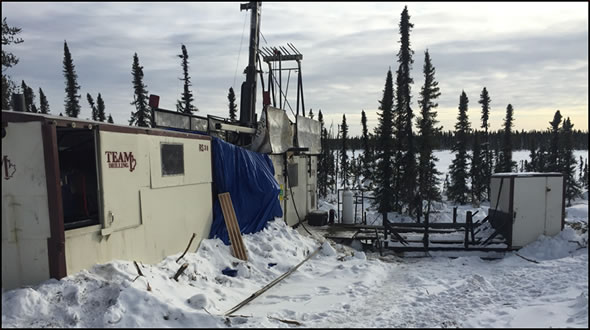 CanAlaska geologists have reviewed all available data to determine the optimal targets to advance this current drilling program. The targets are at relatively shallow depths. The drilling is planned in close proximity to where previously extracted drill core has intersected hydrothermal alteration and uranium mineralization. Geochemical enrichment halos have also been encountered which is promising for the potential to intersect higher grade alteration zones as the drilling shifts further along the structure. Established uranium deposits elsewhere in the Athabasca Basin were encountered within similar suites of alteration and well-defined structural targets.

The ideal host rock has been encountered and hydrothermal alteration confirmed through previous drilling at Waterbury. CanAlaska remains confident that additional uranium deposit zones are awaiting discovery on the Waterbury property holdings. Drill crews have been mobilized and work is now underway.

The Flow through and Charity units are commonly offered at a higher unit price because they afford the purchaser certain tax write offs that make these units more attractive. The higher unit price is also beneficial as it results in less dilution of the capital structure, with fewer shares issued to raise the same amount of money. Shareholders may be encouraged that this latest round of financing activity is well-timed as CanAlaska’s share price is close to its 4-year high.

According to Canadian securities legislation the proceeds from these units must be used exclusively to fund exploration activity. With a full slate of fieldwork and drilling ahead this year for several projects operated by CanAlaska this should not represent a problem. The hard dollar portion (Non-flow through) of the equity offering is suitable for general working capital.

CanAlaska has demonstrated effective financial management to remain active during some difficult years in the past. With renewed bull market conditions underway for the uranium sector, this equity offering will provide the financial resources to enable an active exploration strategy to advance.

The promising claims of the Waterbury project were acquired for low cost through staking in 2005. This was based on interpretation of favorable structure and the proximity to established uranium deposits. Initial phases of exploration activity on these claims demonstrated positive indications that the right conditions were at work for emplacement of uranium.

Exploration activity is often a matter of interpretation and persistence. A skilled geological team will review available data and develop a model of the setting far below the surface. As drilling is completed and drill core is analyzed, some of the unknowns may be resolved. Subsequent rounds of exploration may then achieve a successful outcome through a process of adjustments. CanAlaska is thus able to advance exploration with greater confidence.

Given that uranium alteration has already been confirmed within the property boundary, and the fact that the target zone is located relatively shallow below the surface, the expectation for a successful result during this round is much greater. The commitment to build shareholder value through this patient strategy may generate a valuable uranium discovery. If indeed an attractive interval of drill core is reported during this program, the potential for another enriched deposit will be validated.

With control of one of the largest combined property interests in the Athabasca Basin, CanAlaska has already demonstrated the value of its strategy. Several property transactions have been arranged with senior uranium companies and joint venture projects are advancing. The drilling work now underway may build further on that bridgehead in this prolific district. A successful discovery of a new high grade zone will likely contribute a significant bump in share value. Smallcaps Recommendation: BUY.