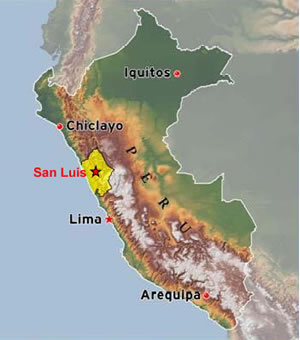 The San Luis gold/silver property, located in the central Ancash Department in Peru, was discovered in 2005 by Esperanza geologists and has now been sold for a considerable premium.

Esperanza Resources (EPZ – $1.46) closed the sale of its 30% stake in the San Luis joint-venture to Silver Standard Resources Inc. Thanks to this deal, the Company now has a full treasury of about $25 million.

This money will be used to move EPZ’s high potential Cerro Jumil silver/gold project in Mexico forward. Additionally, the funds will be used to keep its interest in Global Minerals Ltd. (TSX: CTG) and to advance its blue sky properties in Peru and Mexico.

San Luis is a gold-silver property located in the central Ancash Department, in Peru and was discovered in mid 2005 by Esperanza geologists as part of an on-going reconnaissance program conducted under a Joint-Venture agreement with Silver Standard Resources Inc (TSX: SS0 & NASDAQ: SSRI).

Originally, both Esperanza and Silver Standard held 50% of the San Luis property. However, Silver Standard increased its holdings, first to 55% by funding US$500,000 in exploration work and later to 70% by funding all activities necessary to complete a feasibility study.

In February 2011, Esperanza agreed to sell its remaining interest in the property. Now, after receiving regulatory approval and shareholder approval, the sale is closed and Esperanza received:

With CAD$25 million in the bank, Esperanza can concentrate on advancing Cerro Jumil, Strieborná and its early stage projects in Peru and Mexico.

The Cerro Jumil property in Morelos, Mexico is an advanced project with over 45,000 meters of drilling, pilot-scale metallurgical work and other completed technical studies. The deposit contains 935,000 gold equivalent ounces classified as measured and indicated plus 233,000 gold equivalent ounces classified as inferred. Recent drillings however, confirm that there’s lots of potential for expanding these estimates.

The initial Preliminary Economic Assessment (PEA) on Cerro Jumil, from 2009, is currently being updated to reflect the most recent resource estimate and new metallurgical information. The updated PEA can be expected in the next few weeks and is certainly something to look forward to.

* Note that Esperanza’s interest in Global Minerals declined from 36% to 31% because CTG recently raised $5 million.

The sale of San Luis was a good deal by Esperanza. First of all, the Company substantially increased its cash position while lowering its shares outstanding. Secondly, EPZ now has enough money to continue to invest in two advanced properties with a solid proven resource estimate.