Although this is an attractive result, judging by EnWave’s fourth quarter results, revenue is significantly picking up speed. During the fourth quarter of FY 2017, sales reached $3.63 million, up 44% compared to sales of $2.52 million in the same quarter of FY 2016. This result is due to the sharp rise in sales from Moon Cheese snacks.

After Spire was removed as the exclusive distributor of Moon Cheese in January 2017, sales of the snack went through a slump during the first half of 2017. This was also the main reason why total sales for the year weren’t even higher. However, the decline in Moon Cheese sales was rectified when Slant Design and Marketing was hired to procure new distribution opportunities for Moon Cheese.

Since then, NutraDried added several new retailers in the United States, and it also expanded its broker network across the United States through the signing of additional broker agreements.

Furthermore, during the past year, EnWave has signed six new royalty bearing license agreements, signed ten product development TELOA agreements and entered into a joint research project with the US Army.

As for 2018, everything at EnWave lines up for a breakthrough year. We expect a boom in cannabis-related machinery sales, as EnWave’s technology can substantially reduce costs for producers. In the coming months we should also find out more about the ongoing tests for the US Army and the final FAT tests at Sutro Biopharma. Finally, we foresee continued distribution expansion for Moon Cheese. 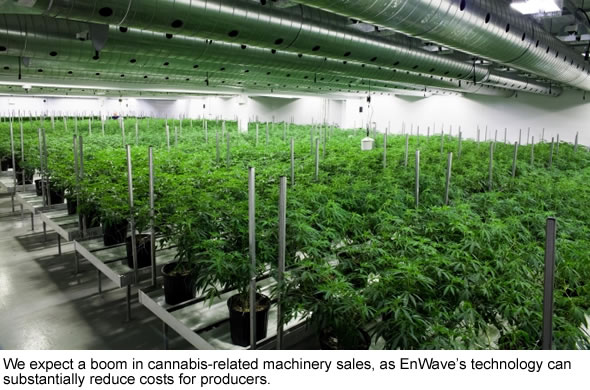 For the full year, EnWave Canada had revenue of $9.39 million compared to $8.82 million in fiscal year 2016, an increase of $573,000. The increase was driven primarily by higher equipment rental fees and royalty revenue.

It is also good news that trade receivables, due from customers on contract, and inventory increased by $1.84 million, $.83 million, and $1.29 million respectively compared to the previous year. These increases were all related to EnWave’s higher machine production number for an increasing number of customers.

While EnWave will continue to push forward in 2018 with more machine sales, technology evaluation agreements, and royalty agreements, there are a number of events that look particularly appealing.

The licensed producer submitted a purchase order for two REV dehydration machines: a 10kW REV unit for product development and a 60kW REV unit for commercial processing. Delivery of the 60kW quantaREV machine is expected in the third quarter of fiscal year 2018. First royalties are expected shortly thereafter. We foresee many more machine sales to the booming cannabis sector in the coming year.

The commercialization of powderREV, EnWave’s technology for the bulk dehydration of temperature-sensitive biomaterials, is also moving forward. During the past year, the Company made significant progress with the construction and testing of the first commercial powderREV machine for Sutro Biopharma, a U.S. based pharmaceutical partner. More news is expected shortly. EnWave also commenced the design phase for the first scaled-up GMP freezeREV for Merck. If the powderREV and freezeREV platforms prove to yield superior performance to incumbent dehydration technologies, it would be a major breakthrough for EnWave.

Moreover, during the summer of 2017, EnWave entered into a contract with the US Army Natick Soldier R&D Center to jointly develop low weight, high quality, nutritious field rations. Initial samples of REV-dried products were tested internally by focus groups, and the feedback was phenomenal. If things progress to the point where the U.S. Armed Forces decide that REV dried products should become available within their organization, then EnWave would work directly with a group of approved suppliers for the U.S. Armed Forces. This opportunity for EnWave is enormous, as potentially hundreds of thousands of men and women in active duty could be served Radiant Energy Vacuum dried rations.

In addition, EnWave expanded its royalty portfolio to include a license for yogurt products, a rapidly growing and large market vertical. Ultima Foods, a major Canadian yogurt processor which produces more than 100 million kilos (220 million lbs) of fresh dairy products each year, will soon start a market trial with a yogurt product produced on a 10kW commercial REV machine from EnWave.