This solid result can mainly be attributed to increased Moon Cheese sales by EnWave’s subsidiary NutraDried, which secured a substantial order from Costco in Q1.

The Company also continues to be cash flow positive with cash flow from operations of $315,000 for the first quarter of 2018 compared to a negative cash flow of $112,000 in the same quarter last year.

In addition, since the start of fiscal year 2018, the Company has signed three royalty-bearing agreements, entered into three Technology Evaluation And License Option Agreements (TELOAs), received very promising feedback from ongoing research at the US Army Natick R&D Center, and secured additional Moon Cheese orders from Costco where the cheese snack is doing very well.

• Signed a royalty-bearing license agreement with Tilray, a major Canadian medical cannabis licensed producer. The license grants Tilray the exclusive right to use and sub-license the Company’s dehydration technology to dry and decontaminate cannabis in Canada.
• Signed a royalty-bearing license with Howe Foods, the second largest producer of bananas in Australia. Howe Foods purchased a small-scale 10kW REV machine to initiate commercial production.
• Signed a royalty-bearing license with AvoLov LLC (formerly AvoChips LLC) a U.S. based snack company to produce a new, and innovative avocado snack product. AvoLov purchased a 10kW small-scale machine to initiate commercial production.
• Achieved a series of positive product development results in partnership with the US Army Natick Soldier R&D Center as part of an ongoing project to create superior, phytonutrient-rich field rations for soldiers in the field.
• Signed a TELOA with Hampton Farms, a major American peanut and tree nut processor and manufacturer.
• Signed a TELOA with Seven Seas Fish Company Limited, a leading Canadian seafood manufacturer and international distributor.
• Signed a TELOA with Calbee Incorporated, the largest snack food manufacturer in Japan. Calbee will evaluate the use of EnWave’s technology at its facilities in Japan using labscale REV machinery.

Currently, EnWave has 13 active TELOAs and two active R&D projects with prospective licensees evaluating the use of REV for applications in the dairy, seafood, spice & herb, fruit products, vegetable products, and meat products verticals. Several of the active agreements are with major international processing companies.

The strategy under these arrangements is to co-develop product applications using the technology for specific partner opportunities and to ultimately convert them into commercial licenses. EnWave earns revenue under TELOAs from short-term REV machine rentals as well as fees for access to its R&D facilities and product development expertise. EnWave’s food scientists and engineers work with the prospective license company during the TELOA phase of the sales cycle to formulate and optimize innovative products using REV, and develop a path towards commercialization.

EnWave generates revenue from two business segments: EnWave Canada and NutraDried. EnWave Canada sells REV machinery to royalty partners, rents REV units to prospective royalty partners, and earns royalties from customers that sell REV dried products. (Royalties are payable to EnWave as a percentage of the value of products sold or based on the number of units produced by its royalty partners). NutraDried, on the other hand, sells Moon Cheese snacks into retail and wholesale distribution channels.

In addition, NutraDried reported a net income of $416,000 in the first quarter of 2018 compared to $126,000 in the same period of fiscal 2017, an increase of 230%. NutraDried’s success solidifies the business case for using REV to create profitable consumer products.

The acquisition of the non-controlling interest in NutraDried will enhance the ability for EnWave to use NutraDried’s processing capabilities as a showcase to prospective royalty partner companies. To date, EnWave has leveraged the success of NutraDried’s Moon Cheese product to attract eight other companies to sign royalty-bearing commercial license agreements for cheese snack production internationally. We will provide an updated overview of these eight partners in our upcoming Q1 Research Report.

Moreover, now that EnWave has full control over NutraDried, additional commercial opportunities using NutraDried’s installed 100kW nutraREV processing line will rapidly be pursued. In a few of months NutraDried will launch a couple of Moon Cheese extension products coined “Moon Cheese Mixems”. For example, different types of cheese will be dried and mixed with a dehydrated tomato. In addition a Moon Cheese salad topper will be launched as an alternative o croutons. These will be distributed through the existing Moon Cheese channels.

NutraDried produces Moon Cheese in cheddar, gouda, mozzarella and pepper jack flavours at its manufacturing facility in Ferndale, Washington, and distributes it in over 20,000 retail locations across Canada and the United States. During the past quarter NutraDried again added several new retailers for distribution of Moon Cheese in the United States and Canada. Notable retail points of distribution include Starbucks, Target, Rite Aid, CVS, Safeway, Loblaws, Save-On-Foods, and most recently, Costco’s Midwest division.

Sales at Costco are going well. NutraDried received additional orders from the Costco Midwest division, and there’s interest from other divisions as well to take the product on. Note that because this is still a rotational item at Costco, there’s no guarantee for longer term distribution yet.

EnWave expects NutraDried to continue contributing positive earnings, revenue growth and cash flow for the Company. NutraDried’s revenues have been increasing each year, reporting $6,556,000 for fiscal year 2017, up 30 times in three years from $221,000 in 2014, its first year of operations. 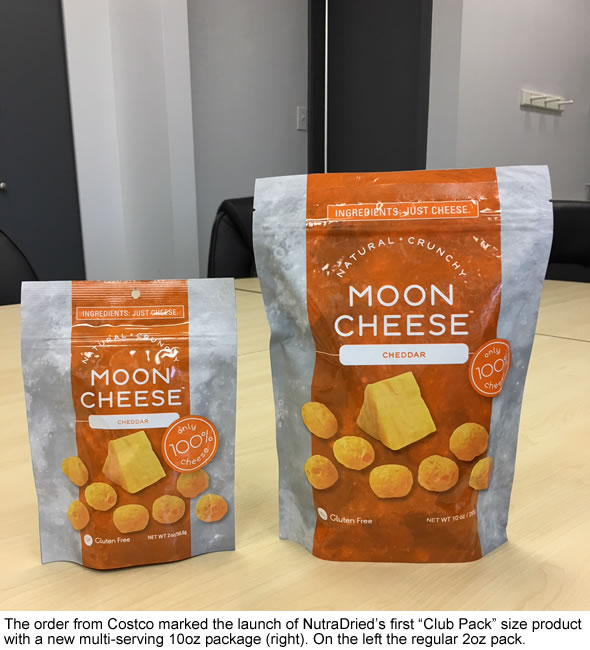 Finally, EnWave’s disruptive dehydration technology was featured in a cannabis special on BTV-Business Television (see video starting at 6:45). The half hour episode will also be aired on BNN this weekend.

With strong sales growth and a positive cash flow, EnWave has clearly set the stage for an outstanding 2018.

NutraDried’s business performance strengthened significantly in fiscal year 2017, and through the first quarter of 2018. We believe that by obtaining 100% equity ownership the Company will be able to further drive growth in the revenue and profitability from Moon Cheese sales. The Company is targeting to reach sales of over $10 million in Moon Cheese alone during 2018.

In addition, NutraDried continues to serve the Company as a showcase of the capability of large-scale commercial REV machinery to current and potential royalty partners.

We also expect to see several agreements and orders from the cannabis space in 2018, along with continued positive developments from ongoing research at the US Army Natick R&D Center. Recommendation BUY.