EnWave Corp (TSXV:ENW – $0.80 CAD & OTC:NWVCF – $0.63 USD) shareholders had been anxiously waiting for the news, but now it’s official. The Company installed, and started up a 120kW commercial quantaREV machine for Bonduelle, a global leader in the production of frozen and canned vegetables. Bonduelle’s global distribution reaches into over 100 countries worldwide. So it’s hard to underestimate the significance of this deal.

This unit enables Bonduelle to produce, for the first time, frozen vegetables with enhanced flavor, color and nutrient concentration. As such, it will be able to significantly distinguish itself from its competitors.

Bonduelle will pay a production-based royalty on a quarterly basis and a monthly lease payment to EnWave as compensation for the use of the 120kW quantaREV machinery.

quantaREV is designed for high-volume, low-temperature dehydration of solids, liquids, granular or encapsulated products. It uses a continuous belt design in a controlled vacuum-microwave environment with an eventual target of dehydrating several tonnes of material per hour. This low temperature technology is designed to provide a higher-quality end product than what is currently achieved with spray drying or air drying. 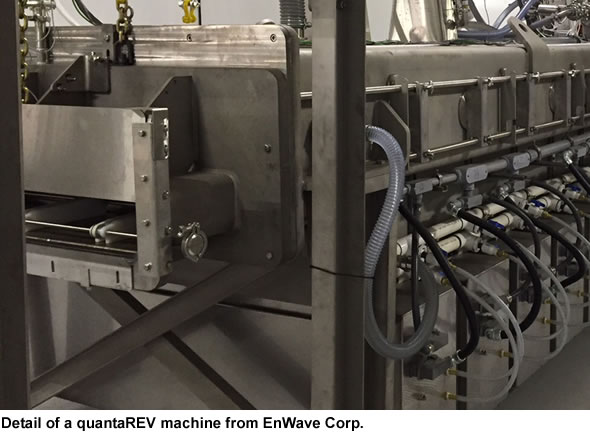 In November 2013, EnWave signed a commercial royalty-bearing license with Bonduelle. After signing the agreement, Bonduelle received an 18kW quantaREV machine to conduct tests and product refinement. In June 2015, Bonduelle commenced R&D activities with a 120kW machine and plans to launch improved frozen vegetable products during the next year.

Moreover, as Bonduelle grows the market for dehydrofrozen vegetables, they will also collaborate with EnWave to finalize the design and construction of a 300kW quantaREV machine for potential future use.

These patents are an essential part of EnWave’s royalty-generating business, because each time a new patent is granted, the royalty stream timeline extends twenty years from the patent’s filing date.

As EnWave’s technology continues to be developed, new innovations are made. As such, it is expected that many more patents will be filed in the coming years.

Bonduelle’s 120kW unit is the first full-scale quantaREV machine in production, which validates the technology and which will undoubtedly trigger the interest of other companies. Similar to the installation of the 100kW nutraREV machine at EnWave’s Ferndale facility, it provides the Company with a direct exhibit of the potential of the quantaREV system. It now truly is a commercial technology as supposed to a theoretical model.

When Bonduelle starts selling the REV dehydrated vegetables, it will generate an attractive production-based royalty for EnWave. If successful, several more units could be ordered by Bonduelle.

In addition, success on commercial-scale is expected to lead to a further and more sizeable deployment of EnWave’s quantaREV technology.