Cheddar and Gouda Moon Cheese snacks will soon be available at 3,500 locations of a major coffee chain in the United States. The dried cheese snacks, manufactured by NutraDried LLP, a 51% owned subsidiary of EnWave Corp (TSXV:ENW – $1.21 CAD & OTC:NWVCF – $1.00 USD), will be part of a sixteen week long program that begins in June 2015.

The standard 2oz cheese packs will be promoted in-store during the first nine weeks of the program, while the following seven weeks will be used to collect sales data and to determine whether the product can sell without extra promotion. Based on this trial period, the coffee chain will decide if it’s justified to continue distributing the product. And if sales go well, it may even expand distribution to more stores.

Clearly, this is an excellent deal for NutraDried, and as such also for EnWave. If, for example, only 2 packs of Moon Cheese are sold per day in each store, the 16-week trial period would generate 1.56 million in sales at a realistic $2 wholesale price per pack.

Thanks to repeat orders from existing customers and rapidly expanding distribution in several Canadian and U.S. grocery chains, the Company is now enjoying increased sales revenues. In fact, NutraDried generated $400,000 in sales during the final quarter of 2014, while it only produced $220,000 in sales in the four preceding quarters.

It all started with a Moon Cheese order for 192 Quality Food Centers and Fred Meyer stores, chains owned by Kroger Company. Since then, NutraDried’s management and an expanding food broker network have substantially increased the number of points of sale.

All in all, Moon Cheese is currently available in approximately 1,700 individual locations. And although reaching 1,700 points of sale in such a short period is a strong performance, it also indicates what a major deal was signed with the large coffee chain.

Originally, NC was formed to secure private label contracts for dried cheese and other healthy snacks using REV technology. Basically, it was the intention that NutraDried LLP would manufacture and sell all branded food snacks, while NC would take care of all private label products. 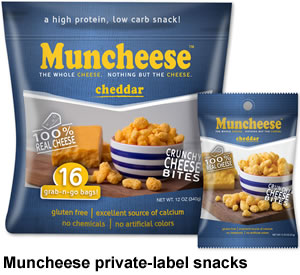 However, because Lucid Capital still had an amount due to NutraDried LLP (majority owned by EnWave), and because both Lucid Capital and NC have the same majority shareholder, a mutually satisfying solution was agreed upon.

The amount due is now resolved and the major advantage to EnWave is that its margins should increase, because the middle man with private-label deals (NC) is now out of the picture.

For example, a few months ago, NC received two orders from Costco to sell cheese snacks under the private-label brand Muncheese. These snacks were manufactured by NutraDried LLP, then sold to NC and subsequently sold to Costco. In the future, NutraDried LLP will sell directly to Costco, and as such increase its margins.

After a successful launch of the Muncheese product in 28 Costco stores, the packaging and package design is now being refined. The dried cheese snack is expected to return to the Costco shelves with an improved look in the spring of 2015.

Thus far EnWave has signed eleven royalty-bearing licenses, opening up eight distinct market sectors for commercialization, with companies that include:

Bonduelle and Hormel Foods, to only name two, will start using their REV units in 2015, which will generate sales and royalties for the Company.

Although selling state-of-the-art dehydration equipment remains EnWave’s core business, it’s clear that the decision to start producing snacks was very smart. While EnWave continues to expand the number of commercial license agreements for its REV machines, NutraDried LLP provides an immediate and growing source of revenues.

Moreover, having a fully operating REV machine that manufactures cheese snacks, is very useful to convince potential clients how well it operates.

The Company’s stock price reacted nicely this week as investors recognize the importance of the deal with the large coffee chain.

More and more signs are pointing towards 2015 becoming the breakthrough year for EnWave. Don’t miss this opportunity. We advise to add shares to your portfolio.