EnWave Corporation (TSXV:ENW – $1.30 CAD & OTC:NWVCF – $1.05 USD) achieved a positive net income in its third quarter ended June 30, 2016. The second consecutive quarter of positive earnings for the Company. EnWave it generated net income from continuing operations of $113,000 compared with a loss of $1,562,000 in the second quarter of last year.

These outstanding numbers can be attributed to the continued growth in sales of royalty-bearing Radiant Energy Vacuum (REV) machines, and the accelerated distribution of Moon Cheese through EnWave’s 51% owned subsidiary, NutraDried LLP.

Significant advancements were made in the past quarter, both in the commercialization of REV in the global dehydration industry and the completion of several new licensing agreements.

Natural Nutrition, for example, ordered a second royalty-bearing, small commercial REV machine to be installed at its Chilean fruit processing plant during the fourth quarter of 2016. And also Eregli Agrosan, a Turkish company that produces high-value, natural products and derivative products for the food, cosmetic and health sectors, purchased its second small commercial royalty-bearing REV machine.

Furthermore, Milne Fruit Products, Inc. placed an order for its second large-scale machine, a 120kW quantaREV, to expand processing capacity of its Microdried fruit and vegetable product lines. This represents a significant milestone for EnWave, being the first time a royalty partner has ordered a second large-scale machine to expand commercial scale REV drying capacity. Machine construction has started and it is expected to be installed in 2017 to expand Milne’s royalty bearing production capacity.

In addition, EnWave signed a royalty bearing commercial license agreement with Kesito LLC, a company specializing in healthy snack production with global distribution. The license grants Kesito the rights manufacture a high-quality, shelf-stable dried cheese snack product in Greece, for which they will pay a royalty to EnWave as a percentage of sales. Kesito ordered a small commercial REV machine that will be shipped in the fourth quarter of fiscal 2016.

Finally, Merom Farms, an agricultural and food production company located in British Columbia, Canada, will soon start selling wasabi-based products under a private label to food processors in Canada and the United States. Merom had purchased a 20kW nutraREV machine from EnWave in 2014. It has been producing commercial product to be sold since then. In the meantime, they have stockpiled enough dried wasabi to fulfill meaningful orders in the coming quarters.

Also, Dominant Slice, based in Portugal, will soon be launching its cheese products line in Europe. 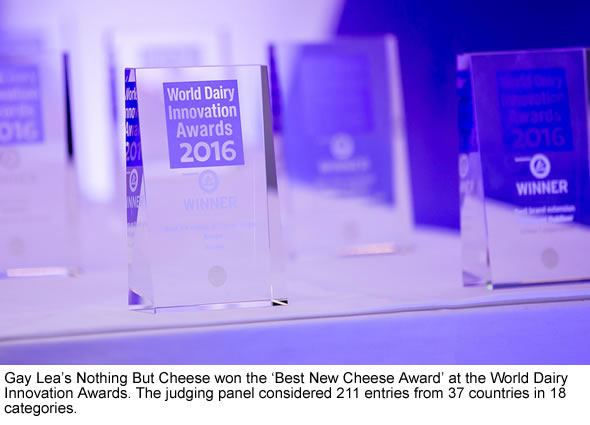 And lastly, Gay Lea Foods started up a 100kW nutraREV machine to expand the production of its ‘Nothing But Cheese’ snack product line in Canada. Nothing but Cheese is a delicious on-the-go crunchy snack made with 100% cheese. It is available in two flavours: Cheddar and Monterey Jack with Peppers.

Noteworthy is that Gay Lea’s Nothing But Cheese won the ‘Best New Cheese Award’ and was a finalist for ‘Best Dairy Manufacturing or Processing Innovation Award’ at the World Dairy Innovation Awards, in London, UK. The judging panel considered 211 entries from 37 countries in 18 categories.

Judging by the announcements that have already been made in the Company’s current fourth quarter, it’s clear that continued commercial success and growth can be expected.

EnWave, for example, signed a commercial, royalty-bearing license with Perdue Farms Inc., one of the largest organic chicken producers in the United States. The license grants Perdue the right to manufacture a high-value pet food product, for which it will pay a royalty to EnWave based on sales of the product. Perdue has initially ordered a small commercial REV machine that will be shipped late in the fourth quarter of 2016.

The Company also advanced its yogurt snack development with Ultima Foods, a major Canadian yogurt and fresh dairy products manufacturer. For more than one year the dairy company conducted product development work on a 10kW REV dryer at EnWave’s facility in Vancouver, Canada. Because Ultima had successfully developed several shelf-stable yogurt snack products, it decided to rent a 10kW REV unit for a period of up to six months to refine its developed products and prepare for a potential commercial launch in 2017.

First, it closed a deal with a leading Australasian manufacturer of fresh and processed meat products. The company will rent a 10kW REV dehydration machine from EnWave to conduct product and market tests. According to the agreement, the company has a maximum of 12 months to conclude its R&D work. The pilot-scale REV equipment will be delivered later this year.

It also signed a TELOA with the Mexican food processor New Products R&D de C.V. (NPRD). The agreement gives NPRD, during eight months, the exclusive right to use EnWave’s REV dehydration technology to develop dried cheese products for the Mexican market. The initial focus of NPRD will be to develop Moon Cheese type snacks, but most likely with Mexican style cheeses.

And a final TELOA was signed with a major European food processor. Tests were conducted in August at EnWave’s facility in Vancouver. And later this year, more detailed development work will occur on a rented 10kW REV machine at the European company’s own plant. If things work out well, we will see a commercial royalty-bearing agreement and a potential machine purchase order in 2017.

Moreover, we expect to hear more about several other potential agreements in the following weeks and months. We should get some clarity on the progress at Bonduelle, for instance. So far, the world’s leading processed vegetable producer, has been producing commercial products on a 120kW commercial quantaREV machine. Bonduelle has been collaborating with EnWave to finalize the design and potential construction of a 300kW REV dryer for potential future use. Clearly news to look forward to.

In addition, we heard that the relationship with Ocean Spray Cranberries is alive and well. The agricultural cooperative, which is owned by more than 700 cranberry growers in North America, is very actively testing the market for dried cranberries. And we also may get some news from Maple Leaf Foods, a major Canadian food processing company, that’s evaluating EnWave’s REV technology for the potential production of a variety of meat applications.

Furthermore, we understand that progress at Ereğli Agrosan, a Turkish company that produces high-value, natural products and derivative products for the food, cosmetic and health sectors, is going very fast.

NutraDried continued its top-line revenue growth through Moon Cheese sales in retail and online outlets in North America. Starbucks continued to purchase Moon Cheese for distribution to its 7,500 corporate stores in the United States, and 1,400 of its Canadian corporate stores. Moon Cheese also continues to be sold in several major North American retail outlets, including select 7-Eleven, Whole Foods, REI, and Winco Foods in the United States, and Safeway, Sobeys, Mountain Equipment Coop, Save-on-Foods and Thrifty Foods in Canada.

These strong third quarter results ensured that EnWave generated positive cash flow from operating activities, prior to changes to non-cash working capital, of $1,720,000 for the nine months ended June 30, 2016.

As of June 30, 2016 EnWave had over $5.7 million in cash. A significant rise compared with the $1.2 million in cash last year. The increase is mainly due to the bought deal private placement from October 2015, in which the Company raised $5 million.

Also note that the Restricted Cash position has been completely eliminated. In July 2014, EnWave issued a letter of credit to a customer of Hans Binder Maschinenbau GmbH, a former subsidiary of the Company, as a performance guarantee on one equipment sale and installation contract. The letter of credit was collateralized by a $1,500,000 restricted cash deposit from EnWave. On May 4, 2016, the Company received $1,020,000 of the restricted cash deposit, and, on August 12, 2016 the remaining $480,000 in restricted funds were received. Subsequent to the receipt of the restricted cash, EnWave has no further financial or operational involvement in Binder.

With $5.7 million in the bank, and being cash flow positive, EnWave has sufficient funds to fulfill upcoming machine purchase orders from various customers.

Also interesting is Due from Customers on Contract, as it has more than doubled compared with last year. The number relates to work performed on equipment construction contracts where revenue has been recognized; however, the amounts are still to be invoiced to the customer based on the contract terms. This amount will basically be recognized as actual sales in one of the coming quarters.

Achieving a first positive net income quarter takes a lot of effort, but immediately adding another one is even tougher. EnWave did exactly that. And thanks to its strong outlook, we may continue to see these kinds of results. As noted above, plenty of opportunities are on the horizon and many more are being added.

It’s also great to see that while revenues is significantly rising, the Company’s costs are under control.

The Company’s stock price reacted nicely to the financials and even reached a new 52-week high intraday. After EnWave’s second quarter 2016 results were published, late May, we wrote that this could be one of the final opportunities to add shares under a buck. Now we wonder how long it will still be possible to buy shares below C$1.50. Buy recommendation.

By the way, we will soon be conducting an update interview with Mr. Brent Charleton, EnWave’s Senior Vice President, Business Development. Suggestions for questions are obviously always welcome in the comments below.