When Agricola Industrial La Lydia ordered its second 10kW Radiant Energy Vacuum (REV) machine back in May 2017, we noted that the original agreement between EnWave (TSXV:ENW – $0.99 CAD & OTC:NWVCF – $0.76 USD & Frankfurt:E4U – €0.65) and La Lydia stipulated that in order for the latter to retain its geographic and product exclusivity, it had to submit a purchase order for a 100kW REV machine within one year of the start-up of the initial 10kW commercial unit.

Since the initial unit was installed in the summer of 2016, it was logical to assume that a major order from La Lydia was in the pipeline.

Now, La Lydia, a Costa Rican company especially known for producing and exporting golden pineapples, has ordered a 100kW continuous REV production line through its newly formed business entity Pitalia S.A. The order is estimated to be worth approximately $1.5 million.

The new unit is scheduled to be installed early 2018 and will significantly expand the company’s processing capacity. Consequently, it will allow Pitalia to start selling pineapple, apple, mango and banana snack products through its Pure Joy brand in the European and South, Central and North American markets.

Because La Lydia is a worldwide supplier of fresh pineapple products, and as such has connections with distributors all over the world, we are convinced that it already has distribution lined up for its REV dried products. 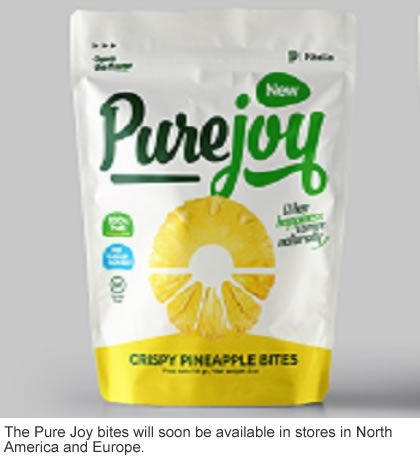 The Pure Joy fruit snacks will mainly be sold to consumers, however a portion will be supplied to other businesses in bulk form to be used as ingredients in their products.

La Lydia is family-owned and was founded over 70 years ago. It currently cultivates about 700 hectares (1.730 acres) of agricultural land and is a leading milk producer in Costa Rica. Its fruit is exported to many international markets in the American and European continent. In fact, La Lydia is a global leader in producing and exporting golden pineapples under the brands YAZ and SWITI. In addition, the management team of La Lydia also leads one of the largest dairy co-operatives in Central America.

La Lydia formed a new business entity coined Pitalia specifically for the production of REV dried products. It’s noteworthy that the new facility has the ability to house several more REV units. This indicates that expanding production capacity in the future will not be an issue.

The building is located in a tax-free zone in Costa Rica to take advantage of several tax breaks regarding the export and production of dried food products.

We couldn’t find any public information about Pitalia yet, but we understand that its new website will be up and running in a couple of weeks.

In other news, EnWave signed a Technology Evaluation and License Option Agreement (TELOA) with a U.S. based leader in the meat and prepared food industries. The name of the new partner company wasn’t disclosed, but when we Google “American meat and prepared food leader” the recurring names are Smithfield Foods, JBS USA, and Tyson Foods. All multi-billion dollar companies.

A TELOA is typically the first step for potential royalty partners. A phase in which they conduct initial testing and product development work before they potentially commit to a commercial license and machine purchase agreement.

In this case, the multinational will rent a 10kW REV machine during a period of six months to evaluate the REV technology as a viable option to process several of its current and potential commercial offerings.

Although no other details were announced, this is an additional step in the right direction for EnWave, as yet another major company is discovering the merits of the REV technology. The TELOA also provides revenue for EnWave, as 10kW machines are typically rented at a minimum of $10,000 per month.

La Lydia/Pitalia has now purchased two 10kW REV machines and ordered one 100kW continuous REV production line. This is another company that started with a small scale unit and quickly expanded into a larger continuous line based on market demand for its products. We have previously seen a similar progression with other companies such as Ereğli Agrosan, Hormel Foods, and Gay Lea.

The sale of REV dryers is generating millions of dollars for EnWave. Moreover, with each additional REV unit becoming operational, the minimum quarterly royalties, which vary between three and five percent of the wholesale value of each product, are increased proportional to the size of the machine. A 100kW machine will typically generate between $200,000 and $400,000 in royalties per year at full utilization. As more and more machines are taken into production, EnWave will benefit big time. Recommendation BUY.