Dominant Slice Lda, a Portuguese snack company, has launched its very own dried cheese product, coined Bit Cheese, for the European market. The snacks come in three flavors, cheddar (cheese with origin in England), Flamengo (cheese with origin in Holland), and spicy (also cheese from Holland, but more spicy).

In August 2015, Dominant Slice received an exclusive license from EnWave that allows it to produce dried cheese snacks in Portugal and Spain using EnWave’s REV technology.

In return for the license, Dominant Slice bought a 10kW commercial-scale nutraREV machine, which was installed late 2015 at its Portuguese facilities. In addition, within 18 months of the installation of the initial unit, the Portuguese snack firm must purchase additional REV machines in order to retain its exclusive license.

Moreover, the company pays EnWave a 5% royalty on all cheese snacks that are processed using REV technology. Note that although Dominant Slice can only produce these snacks in Portugal and Spain, they’re allowed to sell them anywhere.

At this moment, Dominant Slice is building inventory and looking for distribution throughout Europe. In order to introduce its products and attract customers, the company attended the SIAL food show in Paris late October. 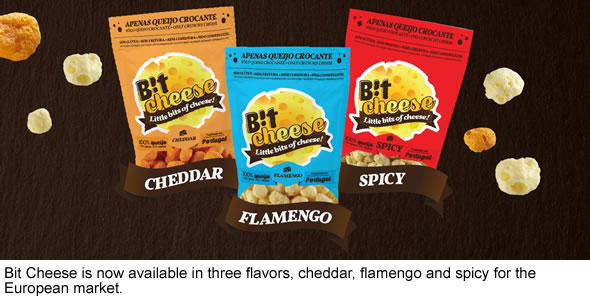 The nutraREV drying method combines radiant heat and vacuum technology. The process, which is fully patented, is relatively straightforward:

Conventional dehydration requires a much higher drying temperature and generally causes the food to lose 50% of its nutrients and removes only 75% of the ingredients moisture. Freeze drying usually creates a Styrofoam texture and degrades flavor. Both of these methods also require some form of added preservative, which decreases the nutrient integrity and/or flavor of the end product.

The most successful dried cheese snack on the market today is Moon Cheese, as it’s available at every Starbucks in North America and at thousands of retail stores in Canada and the United States.

Attracted by this significant success, other food companies worldwide are sensing an opportunity and have closed commercial agreements with EnWave to produce similar snacks.

Dominant Slice is the fourth company that takes a REV dried cheese product to the market. In addition, several more companies are in various stages of preparing their launch.

Next to these commercial agreements, EnWave has signed Technology Evaluation and License Option Agreements with several other companies to develop cheese snacks.

Dominant Slice showed its Bit Cheese snack for the first time to a large audience at SIAL, the world’s largest food fair, held in Paris, France. The fair typically helps forward-thinking food industry players to meet the right people in order to advance the business.

Also EnWave attended SIAL. The Company’s President & CEO, Dr. Tim Durance had several fruitful meetings with current and potential customers. In fact, things went so well that the Company plans to have a booth at next year’s SIAL show.

This year’s figures confirm both SIAL’s leadership and its influence on international food markets and food services providers. The show attracted 7,000 exhibitors and around 155,000 visitors from all across the world.

Dominant Slice is the fourth company to launch its REV dried cheese snack and the first one in Europe. EnWave can now leverage this achievement to encourage further European adoption of its technology.

We’re convinced more cheese snack agreements for other territories will be signed, as they are an obvious success and food companies worldwide are eager to launch new innovative products. Buy recommendation.