Calgary Tunneling, a subsidiary of Enterprise Group (E – $0.73), which is a consolidator of construction services companies operating in the energy, utility and transportation infrastructure industries, was awarded a significant waterway crossing project from a major Alberta based corporation.

Direct Pipe, one of the most technologically advanced and environmentally friendly tunneling systems in the world, will be employed to install a 42-inch pipe casing under the Bow River in the city of Calgary, Alberta.

The value of this project is approximately $2.5 million and is expected to be complete in the fourth quarter of 2014.

Direct Pipe, manufactured by Herrenknecht of Germany, is a sophisticated hybrid that incorporates the best features of both micro tunneling and horizontal directional drilling. It’s unique in both its design and operation, substantially reducing or eliminating most of the issues associated with waterway pipeline crossings and installations under environmentally sensitive areas or in congested or populated areas. Projects in these sensitive environments tend to be met with considerable objection.

The Direct Pipe technology reduces the risks that form the basis of this objection, and as a result has become highly regarded by both the engineering and environmental communities. 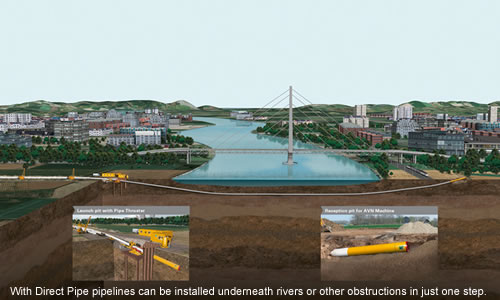 Direct Pipe places Enterprise at the forefront of trenchless technology in North America. Moreover, it provides the Company with a distinct competitive advantage, as Enterprise is the only Canadian company to own a new fully OEM Direct Pipe system.

Enterprise’s other unique technologies will allow the Direct Pipe system to operate within extreme winter conditions. The system employs a fully contained slurry circuit and separation plant, creating high volumes of circulating fluids that could potentially pose challenges when operated at freezing temperatures.

However, when coupled with the flameless heating technology and scaffolding and hoarding expertise offered by Enterprise’s other subsidiaries, the Company is fully capable of operating the Direct Pipe system in arctic conditions.

Enterprise’s ability to offer year-round applications will create significant opportunities for new projects, further distinguishing the Company from its competitors.

We expect all of these acquisitions and capital expenditures to continue to increase Enterprise’s sales and earnings.

The current weakness in the stock price provides an opportunity to pick up some (more) shares.