This week, EnerSpar Corp. (TSXV: ENER – $0.08 & Fra: 5E0 – €0.04) confirmed that it is ready to proceed with its initial drilling program, as part of exploration work currently underway, at its flagship Johan Beetz Property. The first phase of drilling is set to commence immediately, while a second phase is planned to follow up in spring 2018.

The Johan Beetz project, located in the Canadian Province of Quebec, may be considered an advanced stage asset in that there is a significant historic feldspar resource, and the deposit once hosted a producing mine. The deposit includes both potassic and sodic feldspars, which are the rarest types of feldspar and of the highest value. However, there is no compliant NI 43-101 Resource Estimate for the property, which is the standard required for mineral resource documentation and corporate disclosure.

With the feldspars located right near surface at Johan Beetz, it will be a relatively simple process with lower risk and fewer expenses to complete confirmation drilling necessary to establish a compliant resource.

Feldspar is the single most abundant mineral group on Earth, as it accounts for an estimated 60% of exposed rocks, as well as soils, clays, and other unconsolidated sediments. However, some types of feldspar are not abundant elements on Earth, such as Na-spar and K-spar, the two types which are found on the Johan Beetz property. Na-spar is the 2nd rarest form of feldspar, while K-spar is the rarest of all feldspars.

The ceramic and glass industries are the major consumers of feldspar, as they account for 95% of the total consumption. More recently however, feldspar’s application in solar cell panel fabrication has become a huge growth market.

The first step of the work program included mapping, trenching, and surface sampling. This prep work was completed in September 2017. Only minor stripping of overburden was required in order to access sampling points. The sampling process itself was completed using a rock saw to extract narrow channels in the exposed rock units.

The samples were labeled and documented, collected in sealed bags, and then shipped to a lab. The first batch of assay results may be expected within a few weeks. In addition to determining the grade and distribution of the feldspars, some of this sample material can be used for geochemical and metallurgical testing. 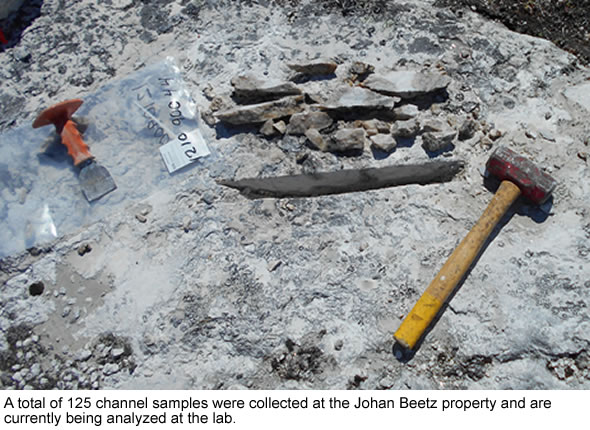 The upcoming diamond drilling program, will punch a series of 50 shallow holes, distributed in a grid across some of the resource zones. A total of about 1250m of drilling is planned, with the average drill hole extending down about 25 meters. The drilling work is expected to commence shortly and may be completed within only a few weeks, confidently by Dec. 31, 2017.

The objective of this work is to begin to outline a feldspar resource that would be of interest to re-establish a mining operation. Since the deposit location and geometry are extremely favorable, open pit extraction is natural and easy; even accessing only the near surface zones down to the water table at about 20 – 25 m depth would provide a very substantial multi year resource. This scenario would generate the lowest cost operating window and could likely sustain production for many years into the future. Therefore the Company has chosen only to drill down about 25 meters in this phase, to save time and complete the work at lower cost, leaving it open to depth for a more distant extraction potentially decades from now.

The Johan Beetz property is situated along a relatively remote coastline on the north shore of the St. Lawrence River on tidewater. From the perspective of a potential mine development, this is ideal, as the property affords immediate nearby access with a deep water wharf structure (already constructed and used in the 1950’s but now in need of some refurbishment – a relatively simple exercise) to enable shipping in large ocean-going vessels. However the property itself is far enough removed from local communities or other economic interests such that a mine development will not interfere with its neighbors. Whale populations in the area will deserve recognition and require some modest caution in scheduling shipments, likely only resulting in modest curtailment in only two months of the year

Conversely, the increased employment potential and spinoff economic opportunities from an ongoing mining operation in this region would create desirable benefits for the local communities.

Maintaining a positive relationship with its neighbors is very important to EnerSpar Corp. The Company has already initiated preliminary consultations with the local stakeholders that could be affected by future development plans, and received expressions of support from the Mayor of the local municipality along with representatives of the closest First Nations group about 50 km distant, the Natashquan.

For shareholders, the longer term potential of the Johan Beetz project comes down to the opportunity to maximize the value of this property. One option will be to consider the outright sale of the property once a compliant NI 43-101 resource estimate has been defined. A robust resource estimate and positive metallurgical performance testing will increase the potential to attract buyers that are interested in the actual development of the project. The appeal of this project is further enhanced by its location in mining-friendly Quebec, which is rated among the top jurisdictions in the world to operate a mine.

Vending the project to another company would generate an immediate gain for shareholders. The property was acquired on very reasonable terms, including a payment of $100,000 in cash, plus a further $100,000 represented by the issuance of 2 million shares. A suitable development candidate would have to pay many times what it cost EnerSpar to acquire the project and complete a resource estimate.

However, the Company may also opt to advance mine development through to production on its own. This could realize greater gains for shareholders over a longer term, but it would also create challenges to secure capital funding for the development, and acquire the team with operational skills to run a mine. These are good problems to have though.

There are certainly attractive value options available, pending the completion of a positive resource estimate to validate the historic data, and allow serious consideration of a potential mine plan.

EnerSpar Corp currently trades at bargain levels, with a market capitalization below $2 million. This represents a fraction of the value that could be established for its flagship asset, the Johan Beetz property. It should be an uncomplicated process for the Company to complete exploration work necessary for calculation of a compliant resource estimate. The entire program can be completed at a modest cost base.

The potassic and sodic feldspars which have been outlined in the deposit are of limited availability worldwide, and demand for these resources is anticipated to increase along with increased production of solar panels, tempered glass, and other industrial products that consume these higher value feldspars. The presence of mica in the pegmatites comprising the resource could be of additional economic value, are expected to be easily separable by a simple flotation process and have not been contemplated in any consideration of value, just remaining as an “upside enhancement”.

The reporting of positive channel sampling results is often a catalyst for a higher share price. Moreover, the upcoming work programs will enable the completion of the compliant NI 43-101 resource estimate (projected for full completion late 2018 but with the possibility of early partial validation of the historic non-compliant resource as early as this coming winter), which is also critical to advance the project and build the confidence in the resource data. This too should support a higher share value.

Over the longer term, the Company is advancing along the path that could deliver a significant upgrade in asset value for shareholders, either by facilitating the sale of the project, or development to an operating mine that can produce a high value commodity. Recommendation: Buy