A total of about 1250m of drilling is planned, with the average drill hole extending down about 25 meters. As the feldspar resource is located right near surface, drilling these shallow holes is more than sufficient to establish a very substantial multi-year resource. The drilling work should be completed before the end of the year and initial results are expected in the first quarter of 2018.

The goal of this program is to outline an NI 43-101 compliant feldspar resource by late 2018, so that a mining operation can be re-established at the Quebec property.

The ongoing drilling activity is part of the Phase I work program at Johan Beetz. Previously, mapping, trenching, and surface sampling were completed in September 2017. In total, 125 channel and grab samples were sent to the lab for analysis. Assay results from these samples are expected very shortly. These results should already give a fair estimate of the potential of the property.

Phase 2, a more extensive drilling program, will be conducted in the spring and early summer of 2018. 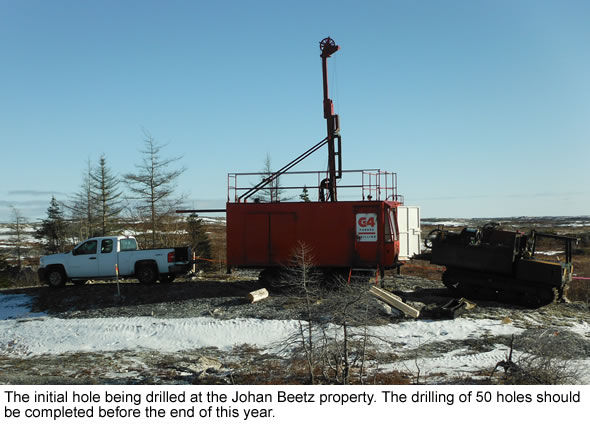 All lights On Green

The Johan Beetz property has lots going for it. First, it is located directly on tidewater on the North Shore of the St. Lawrence River, 2.5 kilometres (1.5 miles) east of the village of Baie Johan Beetz. Access to the property is by Hwy 138, which connects the town of Johan Beetz to the town of Havre St. Pierre and Sept Isles. Power transmission lines are also nearby, beside the road which passes within 2 km of the property.

With its own large docking facility, the property provides easy access to the eastern seaboard of North America, where the main distribution points (Newark, New Jersey and Savannah, Georgia) are located for imported feldspar. This gives a huge transport cost advantage to EnerSpar.

In addition, although feldspars are the most abundant materials on the surface of the earth, the two types of feldspar found on the Johan Beetz property (Na-spar and K-spar) are the rarest and consequently the most expensive ones. In fact, there are NO operating feldspar mines throughout North America that produce the high quality material found at Johan Beetz.

Imerys S.A., a French multinational company which specializes in the production and processing of industrial minerals, closed the final major potassic feldspar production site in the United States in December 2013. The company had previously been supplying over 50% of U.S. production.

It’s extremely interesting to know however that Imerys is controlled by the Canadian family Desmarais, who is based in Quebec, the same province in which the Johan Beetz project is situated. Mr. Richardson, the Chairman and CEO of EnerSpar Corp. mentioned in our recent interview that he believes they are a very prime candidate to take over the property when the time is right.

Moreover, several mineral resources or reserves have already been quoted in literature related to the Johan Beetz property. However, as they all date back to prior to the application of National Instrument (NI) 43-101 – Standards of Disclosure for Mineral Projects, they are to be considered historic in nature.

The most detailed estimate was prepared by Germain and dates back to 1956. His findings were mainly based on 25 vertical drill holes, totalling 1,578 feet, which were drilled in 1955. A total ‘reserve’ of 33.4 million tons containing 16 million tons of ‘commercial spar’ was calculated by Germain.

Feldspar is not a quoted commodity as it is usually negotiated by contract. The advantage is that those contract prices tend to be more stable and not fluctuate with the capriciousness that is often found in the precious metals market. Depending on the quality and grade of the feldspars, the price is typically somewhere between $100 and $450 a ton.

Finally, K-spar and Na-spar are used in ceramics, glass, tempered glass, but most importantly also in the booming PV glass and solar tiles markets. Tesla’s SolarCity is manufacturing its solar tiles in Buffalo, New York, which is just a boat journey from EnerSpar’s Johan Beetz project.

EnerSpar remains on track to advance the project rapidly, either to production or to a liquidity event. The goal is to have an NI 43-101 compliant resource estimate around the end of 2018. At that point, the Company would have ears to an attractive take-over bid.

Of course, there’s always the possibility that the Company is not acquired. In that case, it can put the property into production itself. After all, the feldspars are located at surface, meaning that a very easy and conventional extraction process is sufficient. This is much easier and more cost effective than having to build an underground mine and carries far less execution risk.

EnerSpar Corp currently trades at bargain levels, with a market capitalization below $2 million. This represents a fraction of the value that could be established for its flagship asset, the Johan Beetz property.

We believe these are all compelling reasons that justify a significant increase in the Company’s share price. Recommendation BUY.