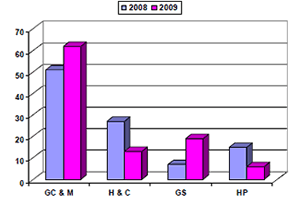 Sales breakdown per category in percentage for the quarters ending September 30, 2009 and September 30, 2008. It’s obvious from the graph above there’s been a big shift in sales from low margin to high margin products.

The end of the year is a good time to do some bargain shopping. Not only in malls, but also on the stock exchange. Take for instance, DAC Technologies (DAAT – $0.80) which is currently trading at 5 or 6 times fiscal year 2009 earnings. The Company’s net income for the first nine months of 2009 is higher than the net income of the entire fiscal year 2008 and the current fourth quarter is expected to be a terrific one as well.

We believe DAC Technologies’ shares can significantly appreciate in the course of 2010 because:

As we are confident in DAC Technologies’ long term future, we reiterate our buy recommendation with a 12-month price target of $1.69, which is more than double today’s stock price.