Yet another blockbuster deal has been reported in the Cannabis sector this week for EnWave Corporation (CA:ENW – $2.12 & US:NWVCF – $1.58 & GER:E4U – €1.43) with the announcement that it has established a partnership with Aurora Cannabis. This was an important transaction for the ongoing adoption of Radiant Energy Vacuum (REV) technology within the sector as Aurora is considered a leading innovator for development of cannabis products and the deal may lead to new commercial opportunities for further growth.

In this multi-phase arrangement, Aurora has agreed to purchase at least three and possibly four REV machines. Two 120kW commercial REV dehydration machines will be installed at the Aurora Sky and Aurora Sun cannabis processing facilities located in Canada. A third 120kW commercial REV unit may additionally be purchased within 60 days for installation at the Aurora Nordic facility in Denmark. Aurora has also purchased a smaller 10kW REV machine for product development, protocol development, and R&D purposes.

As with other equipment sales agreements secured by EnWave, a license has been granted to Aurora with exclusivity to operate the REV machines for the production of cannabis in Europe (excluding Portugal), and options to exclusively license REV technology in Australia and South America (excluding Peru) for cannabis manufacturing. A royalty to EnWave is payable on all cannabis production using the REV process. A non-exclusive sublicense has also been granted for use of the machines within Canada.

Considering that Aurora is one of the largest cannabis producers in the entire sector, with funded capacity to produce more than 625,000kg of cannabis per year, this royalty leverage could amount to a very significant revenue source. 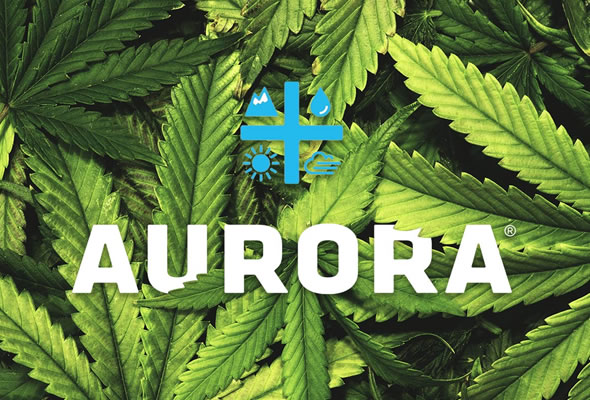 With sales and operations in 24 countries across five continents, Aurora is one of the world’s largest and leading cannabis companies.

The emergence of REV technology has delivered material advantages for the processing of cannabis plants that provide vastly improved efficiency above other options available to the industry. REV dehydration units may process high volume cannabis production within a matter of hours that would typically require 5-7 days using conventional technology. In addition, the REV machines enable cannabis producers to precisely control the level of retained moisture within the processed plants, with far superior results for secondary processing to produce CBD oil and THC derivatives.

As the development of cannabis products advances, the potential for new applications using REV technology will also arise. With the established presence in research and development already in process through numerous subsidiary companies, Aurora is therefore the ideal candidate to advance further technology innovation using REV processing within the cannabis sector. EnWave has selected Aurora as its partner to jointly develop new innovations, under an Intellectual Property Agreement (IPA).

Under the terms of the IPA, the intellectual property developed in this partnership will be owned by EnWave, but any subsequent commercial value created by this arrangement shall be shared by the two partners. The IPA is thus a strong driver for future potential growth.

Similar to the strategic arrangement that EnWave has in partnership with Tilray Inc. which contributed to the significant sub-license agreement with The Green Organic Dutchmen, Aurora and EnWave will also have the opportunity to develop further sub-license agreements using the technology within Aurora’s exclusive jurisdictions, and share in the royalty revenue stream created through any such agreements with EnWave.

Another dimension of this arrangement that is also noteworthy is that Aurora has committed to participate in a strategic equity placement. The deal was structured similar to a share swap valued at $10 million, whereby Aurora issued 840,576 common shares to EnWave in payment for a block of 5,302,227 EnWave shares. Following this transaction, Aurora now controls approximately 4.91% of the issued and outstanding EnWave shares.

EnWave has indicated that it will act to realize the cash value of its Aurora share ownership with a number of options under consideration, including the outright sale of the shares or a potential loan transaction. The Company intends to monetize this holding as soon as possible.

As per the TSX security laws, all shares involved in this transaction are restricted from trading for a period of four months plus one day. The deemed share value was based on the trailing average price over the previous five trading sessions.

Since the beginning of 2016, EnWave shareholders have participated in a tremendous bull market with the market price for shares of the Company tripling in value. This outstanding market performance has been driven by the rapid sales growth as EnWave reports equipment sales and royalty agreements with a multitude of new partners in a variety of distinct sectors. The latest breakthrough transaction reported this week with Aurora has continued this winning streak. All recent success has been driven by the operational and management changes at EnWave.

In addition to the significant cash value related to the REV machine sales and the longer term royalty stream anticipated through high volume cannabis production achieved with REV processing advantages, further potential growth opportunities may be created from this deal.

Aurora is already established as an innovator in the cannabis sector on the leading edge of technology development. As a fully integrated producer of cannabis with diversified interests across the spectrum of cannabis products for recreational and medicinal consumption, Aurora operates 15 wholly-owned subsidiary companies, active in 24 countries worldwide.

With this large and influential player now enlisted as a partner to create further applications for REV technology through the IPA there is added potential to build greater leverage in the cannabis sector going forward. It should be noted that the decision by Aurora to hold a large block of EnWave shares may also be seen as a validation of the future potential for this partnership to build shareholder value. In effect, the investment by Aurora to partner with EnWave and the installation of REV processing for a significant percentage of its total cannabis production represents a concrete validation of this REV technology advantage.

The cannabis sector is just one of many profitable commercial channels where EnWave has been successful to establish partnerships for its REV technology. It has now evolved to become more of the most important growth opportunities for the company and further expansion opportunities may yet be developed. This diversified growth profile in tandem with a roster of established partner companies has powered the strong market performance by EnWave.