Early stage gold prospects have a greater chance of success if a thorough and methodical exploration approach is carried out by a team that has already made a significant gold discovery in the same gold belt. The objective is not necessarily to achieve a breakthrough discovery in the first stages, but to narrow down the search area in order to drill test the best zones for discovery. The odds of encountering significant mineralization are greatly improved with the completion of preliminary work programs that pinpoint the best zones for drilling based on a keen understanding of what it takes to make a major discovery in the belt.

With this in mind, Palamina Corp (TSXV: PA – $0.39 & OTC: PLMNF – $0.31) has announced this week that it is advancing exploration work at three of its highly prospective properties within the Puno Orogenic Gold Belt (POGB) of Peru. A heliborne geophysical survey is set to commence shortly to collect aeromagnetic-radiometric data for the wholly owned Coasa, Gaban and Cori Gold Projects located in southeastern Peru.

Employing Airborne Geophysics to “See” Structures Below the Surface

Airborne geophysics is a powerful technology to rapidly collect data for a large property area to identify structures in order to narrow the focus on subsequent exploration programs. A magnetometer is suspended below a helicopter above the target survey areas in order to measure the magnetic response in the upper elevations of the rock mass. Radiometric surveying concentrates on the levels of radioactivity emitted from the rock mass and this information can be used to delineate different rock units and structural zones.

While gold itself is not magnetized and will not show up on an aeromagnetic survey, gold in the POGB is frequently associated with units of alteration where magnetic pyrrhotite is also present. These alteration zones are expected to generate a distinct signature in the survey. Similarly, since gold has been encountered within the POGB as part of sulphide alteration and shear structures, these prospective gold zones will also have varying radiometric signatures compared to the surrounding rock units. Again, this should light up with clear indication in the survey data when encountered. Therefore when a map of magnetic highs is overlaid with data to delineate differences in radioactivity, the correlations are expected to outline target areas where the potential for discovery of a gold deposit is much higher. 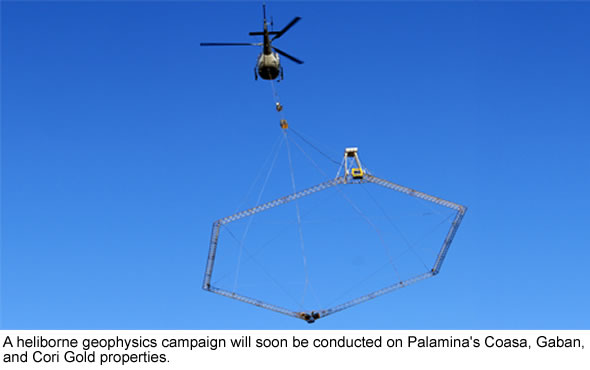 In addition, gold mineralization in the POGB is structurally controlled. Consequently, results from the airborne survey will be studied to identify possible deeper structural zones of interest and cross faults in order to gain an understanding of regional trends. This geophysical data will be used to narrow down sections of the existing gold trends for follow up sampling and mapping programs in order to define drill targets.

One other appealing aspect to this program is that data may be downloaded at intervals as the work is being completed, and therefore interpretation can begin as the survey reporting is received .

Given the mountainous terrain features of the projects involved, a helicopter is the most effective means to deploy the aerial sensing equipment, such that a uniform altitude of about 40 meters can be maintained along a series of lateral flight paths. A total of three surveys will be completed, comprising more than 3,800 line kilometers of surveying. These corridors have been selected to focus on the most promising geological features for each property.

At the Coasa gold project, a structural corridor has been identified extending through the property that is related to GoldMining’s Crucero gold deposit to the southeast. Geological mapping and sampling also suggests that this structural zone may host additional gold deposit areas within the Coasa property boundary. Palamina has opted to complete 1,234 line kilometers of airborne magnetic surveying at Coasa.

The Gaban gold project is being investigated to determine the source of Alluvial gold from the Yanamayo river where Palamina controls 85% of the mining rights from the perceived watershed area. It is hoped that the aeromagnetic survey will further identify mineralized gold bearing shear zones within structural regional trends. A total of 989 line kilometers are planned to be flown in this area.

Meanwhile, the Cori gold project is of interest due to small scale mining activity ongoing in near surface quartz veins along a 3 kilometre trend on the ridge of the Corimayo mountains. Palamina controls areas on each side of the existing gold trend and the area north of the existing gold mining area. The survey will cover 859 line kilometers.

The ultimate objective for Palamina is to identify and drill off a world class gold deposit in Peru. Based on the amount of gold being mined in the POGB by informal miners and the size of Palamina’s holdings in the Belt, there is evidence to suggest that at least one large gold system may be endowed within the rocks of the various projects controlled by the Company.

Controlling five attractive gold projects located within the POGB, Palamina is now embarking on its preliminary geophysical surveys for the first three of these. Palamina is not aware of any other Company that has flown airborne geophysics on the Palamina project areas being surveyed. Palamina’s strategy is to use tight line spacings of 125 metres on areas it feels host the best potential for discovery while using 250 to 500 metre line spacings to cover much broader areas to better understand what is going on stucturally within the belt. This data, in addition to the known gold mine areas in an underexplored orogenic gold belt, should provide new insight into the gold mineralization of the POGB. This is the behavior of a successful junior explorer that provides the best opportunity to achieve a discovery.

The Company is now ramping up its activity with the objective to advance its exploration projects further along the value curve. Junior exploration companies are highly leveraged to the potential for a discovery breakthrough and the most successful stories involve steady work carried out for a suite of high quality properties.

Since the original buy recommendation was presented for Palamina Corp by Smallcaps Investment Research, the stock has increased by more than 30%. This notable gain has occurred during a short time frame of about 5 months. This does not mean the end of the ride though. In fact, if this work program now underway generates data that identifies new follow-up targets of interest, then this may be the catalyst to move the share price even much higher.

With an experienced management team that has a combined 35 years of exploration work within the POGB, and that has achieved successful discoveries using the same disciplined exploration strategy on behalf of other companies in the past, the prospect for another positive outcome in Peru is enhanced. Recommendation: BUY.