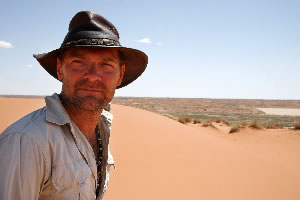 Les Stroud, a.k.a. Survivorman, has co-designed a line of Camillus survival knives and tools. The fourth season of the popular TV series, in which Les Stroud will use the new Camillus knives, will air in the summer of 2012.

Survivorman is broadcast on the Outdoor Life Network (OLN) in Canada, Science Channel in the US and Discovery Channel International. The TV series is licensed for broadcast in over 120 countries worldwide and became the highest rated show in history of both OLN Canada and the Science Channel US. Ratings in the US alone have hit 2 million on individual episodes.

The “Les Stroud product line” will be marketed under the Camillus brand and will consist of knives and other survival tools. They will be launched at the Shot Show, held in Las Vegas from January 17, 2012 until January 20, 2012. Les Stroud will personally support the launch of the knives by doing an autograph signing during the Shot Show, at the Camillus booth, on the 17th and 18th of January between 1 and 3 PM.

Survivorman refers to the host of the show, Canadian filmmaker and survival expert Les Stroud, who uses survival skills to survive up to seven days alone in remote and challenging locales, while videotaping his adventures. He brings with him little or no food and water and is equipped with only his clothes, camera equipment, his harmonica, a multi-tool, and often “everyday items” relevant to the episode’s particular survival situation or locale.

In each episode Stroud places himself in a unique survival situation. The show is meant to demonstrate how one might survive alone in a remote location with minimal supplies until being rescued. Finding food, water, and materials to make fire and shelter pose the main challenges of each episode.

The expertise and input from Les Stroud, combined with the Camillus carbonitride titanium non-stick technology, which makes the blades 10 times harder than stainless steel, have created some powerful tools for outdoor enthusiasts.

Excellent tools, which are extensively featured in a TV series with up to 2 million viewers in the US alone, should lead to solid demand by consumers. This is the first time an Acme United product is promoted this way, and I’m convinced this will have a positive impact on the Company’s financials next year.

Photos of the new Camillus knives and tools aren’t available for publication yet, but I promise you that after the Shot Show, you’ll see them right here even before they’re available in stores.