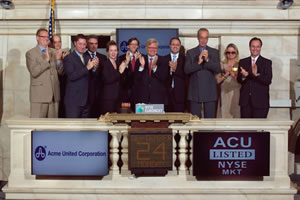 Executives of Acme United and guests watch as Walter Johnsen rings the opening bell of the New York Stock Exchange.

Walter Johnsen, the Chairman and CEO of Acme United (ACU – $11.82), rang the opening bell at the New York Stock Exchange (NYSE) earlier this week. He was joined by several Acme management members and guests (see video below).

This is a nice recognition by the Exchange towards Acme United and obviously an honor for the Company looking at the long and impressive list of world leaders, heads of states and big name companies that have opened the trading day in the past.

The History of ‘Ringing the Bell’

Ringing the opening and closing bell at the NYSE hasn’t always been such a highly publicized event as it is nowadays. In fact, it was only in 1995 that the Exchange began inviting special guests on a regular basis to ring the bell. Prior to that, it was the responsibility of the Exchange’s floor managers.

Because ringing the opening and closing bell receives so much coverage, many companies even plan new product launches and other marketing-related events on the same day as when the company’s representatives ring the bell.

Interestingly enough, a bell wasn’t always used to mark the start and stop of the trading activities. Originally, a gavel was used and during the late 1800s, the Exchange switched to a gong to signal the day’s beginning and end. The bell was introduced in 1903 after the NYSE moved to its present location.

Although this event probably won’t help Acme United sell many scissors, it does get the Company in front of millions of viewers on CNBC and CNN around the globe. That in itself makes it more than a worthwhile event.