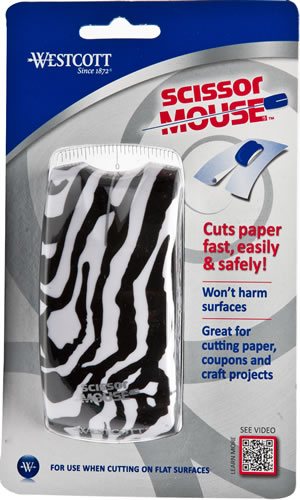 The Westcott Scissor Mouse is expected to contribute $1.5 million in sales in 2012.

For 2012, Acme United expects to again expand its revenues to between $80 and $85 million, or an increase of between 9 and 16 percent. Especially Camillus knives, the new Scissor Mouse, the Westcott paper trimmers and Pac-Kit should contribute to the growth.

Equally important, is that growth was noted in most product categories and in all segments. Sales in the U.S. segment, for example, increased by 22% in the fourth quarter and by 20% in 2011. This growth was driven by higher sales of iPoint pencil sharpeners, non-stick scissors and first aid products.

In Canada, sales were flat for the fourth quarter, but were 10% higher for the full year, mainly due to the introduction of the Clauss gardening tools.

* Note that the tax rate for fiscal year 2011 was 30% compared with only 12% in 2010. The extraordinary low tax rate in 2010 was due to a tax benefit associated with the Company’s donation of land to the City of Bridgeport, CT.

Gross margins in 2011 slightly declined to 36% compared to 37% for 2010. The decline was primarily due to the addition of the Pac-Kit line of products, which have lower gross margins than most of the Company’s other products. Mr. Johnsen, Acme United’s Chairman and CEO, noted during the fourth quarter conference call that Pac-Kit margins were around 27% when it was acquired on February 28, 2011. Currently, they’re already in the 30s and moving towards Acme’s average thanks to the combined PhysiciansCare/Pac-Kit buying power.

Camillus knives has received orders from several mass market retailers for its regular line of knives and the Les Stroud signature series. First shipments are commencing this month. Moreover, new products like the Westcott Scissor Mouse and paper trimmers along with the increased distribution of Pac-Kit products to mass market clients are also expected to be big contributors to the growth.

In order to deal with the growth, Acme is hiring more staff, it’s negotiating to expand its line of credit and the Company is adding capacity in its Chinese production factories.

Acme United’s results hardly ever disappoint. The Company had a good year in 2011 with some solid top and bottom line growth. Additionally, it has projected a sizeable revenue increase for this year.

Next to rising revenues and earnings, increased distribution and new product introductions, Acme United’s growth story is also supported by a 7 cents quarterly dividend, which at today’s share price is an annual yield of almost 3%. Buy Recommendation.