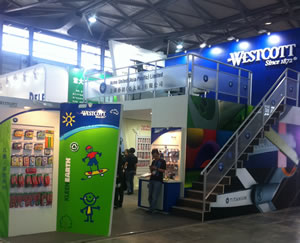 Acme United's booth at Paperworld China 2011 was well attended and received many prospective buyers from the Asia Pacific region.

Global retailers like Wal-Mart, Staples and Tesco, that also have a strong presence in South-East Asia, are always on the lookout to introduce new and exciting products in their stores. So in light of Acme’s intensified focus on the Asia Pacific market, it’s important to participate in these kinds of conferences to meet potential clients.

Although the emphasis was on office products, several Clauss items, like the garden tools, were also displayed in Acme’s booth and received good feedback.

With sustained economic growth in countries like Thailand, the Philippines, Indonesia and China it’s important for companies like Acme United to attend events like Paperworld China which give the opportunity to connect with target buyers from around the world and to strengthen existing customer relationships.

Although it’s too early to actually announce a deal that stems from the conference, Acme’s management did have several positive meetings with potential buyers.

I’ve scheduled an audio interview with Mr. Johnsen next week. I’ll ask him about the business opportunities in China. But we’ll also cover Acme’s business in Europe and North America, along with his prospects for the near term future.