The first half of March is always a key moment in the year for Acme United’s (ACU – $20.20) European team, as two major shows are held: the International Hardware Show in Cologne and the IWA OutdoorClassics in Nuremberg.

Next to giving a good indication of the state of the market in general, the shows also are important for meeting existing and new customers to fill the order books. The team was successful at accomplishing exactly that at both shows, as orders and new leads were noted for DMT, Westcott, Clauss and Camillus. In fact, a noticeable trend is that distributors that used to buy products from one Acme brand, such as Camillus knives, now also buy products from other brands, such as DMT sharpeners or Clauss hardware tools.

Decision-makers from all over the world made use of the International Hardware Fair in Cologne, Germany, the number one event in Europe for the hardware industry, to discover the latest products, innovations and trends.

The 2018 edition of the bi-annual show attracted around 2,770 exhibitors from 58 countries, and more than 47,000 trade visitors from 143 countries. The total number of visitors increased by nine percent. Substantial growth was noted from Asia, North and South America, Africa and the Russian Federation, with twelve percent more trade visitors coming from the United States.

The IWA OutdoorClassics, Europe’s leading trade fair for hunting, shooting sports, outdoor activities and security, ended on a positive note after four successful days, which saw over 1,500 exhibitors from almost 60 countries and around 50,000 trade visitors in Nuremberg, Germany. 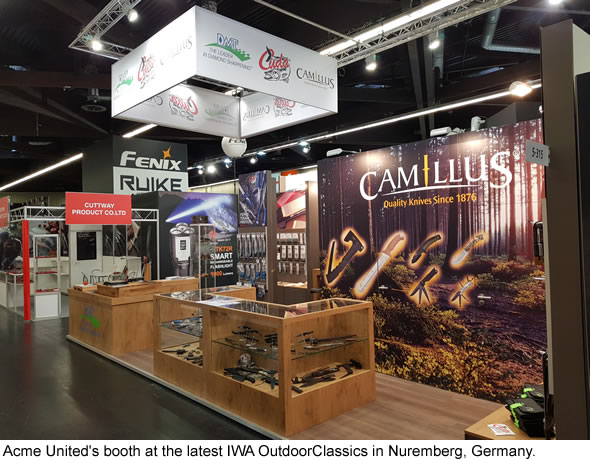 This year, the show celebrated its 45th edition. What started as a small exhibition accompanying the AGM of the Association of German Gunsmiths and Gun Traders in 1974 with just 106 exhibitors and around 2,000 trade visitors, has grown into a renowned international trade fair.

Over the years, the original focus on hunting, sports firearms and ammunition was constantly extended, especially in the area of outdoor clothing, optics and electronics for outdoor pursuits, and products for civilian and official security. The IWA OutdoorClassics has also become one of the world’s largest trade fairs for knives, with around 200 exhibitors alone presenting cutting implements for all areas, from traditional pocket knives for picnics and camping to exquisite collector’s items for display cabinets.

As we indicated several times in the past, DMT is doing very well in Europe, and that trend continues. The new Sonic-Sharp, for example, DMT’s first battery operated sharpener, was introduced at both German shows and received lots of attention from distributors.

Also very popular at DMT are the brand new guided sharpeners, such as the Disc-Sharp and Simple-Sharp. The reason is very simple, sharpening a tool on a bench stone requires some skill and practice, while with these new quick and easy-to-use sharpeners, even beginners can get an exact edge bevel and consistent angle. People were quoted saying, “ DMT already had the best sharpeners on the market, now it also has the most convenient ones.”

The IWA OutdoorClassics as well as the International Hardware Fair were successful events for Acme United Europe, as the team received orders for wide range of products from all over Europe and the Middle East. Recommendation BUY.