This year marks the 150th anniversary of the founding of Acme United Corporation (ACU – $28.60). In one and a half century, the Company has become the biggest scissor manufacturer in the world, and a major supplier of cutting devices, hunting and fishing tools, and first-aid products for school, home, office, industrial and hardware use.

The roots of the Company can be traced back to 1867 when German immigrant Leo Renz bought an old grist mill in Naugatuck, Connecticut and opened Renz Shear Shop, specializing in cast iron shears and scissors.

In 1873, Leo Renz, along with his brother Robert Renz, another family member Mitchell Renz, and John Peck, officially incorporated their business as The Renz Shear Company.

The business continued to grow until in 1878 when Leo Renz passed away. The Company was subsequently sold to Mitchell Renz, who moved the operations to Fairfield, Connecticut in 1880. Two years later, the Company was incorporated as The Acme Shear Company.

Mitchell Renz developed several design improvements to shears and scissors and also obtained U.S. patents for them. He was also responsible for bringing the brothers David C. Wheeler and Dwight Wheeler into the business. In fact, they bought out Renz, who decided in 1883 to quit the shear making business to try his luck in Florida in real estate.

Under Wheeler management, Acme Shear expanded its product lines. By 1885, it needed more manufacturing capacity and bought 5 acres on Hicks and Knowlton Streets in Bridgeport, CT. The following year, the first scissors were manufactured at the brand new plant. The Company would continue to produce scissors and shears at that same location for 111 years. 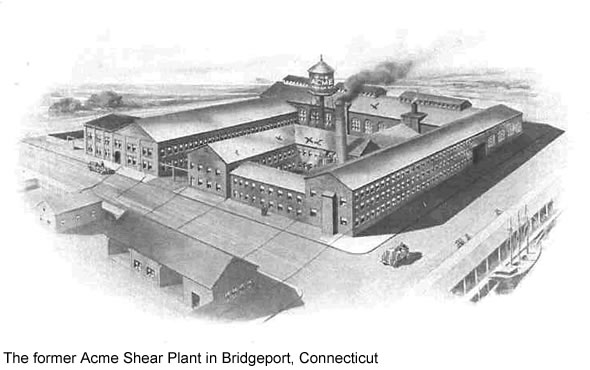 In 1923, the plant in Bridgeport, CT again had to be expanded to meet rising demand. In 1936, Acme Shear became the largest scissor and shear manufacturer in the world, a position it still holds today. In that time, annual production exceeded 15 million pairs.

In 1942, the United States was at war with Germany and Acme once again converted to war work. Dozens of employees enlisted, and a nursery was established to attract mothers into employment.

After World War II, the Company continued to grow. Production capacity was added and annual sales volume expanded. Domestic and export volume continued to expand, and by 1955 set new records as the United States and Europe rebuilt after the war.

In 1960, Acme Shear acquired Surmanco Ltd, a scissors manufacturer in Sheffield, UK with the goal to sell directly to the European market.

Three years later, Acme purchased the Seneca Novelty Company, a manufacturer of wooden rulers and yardsticks based in Seneca Falls, NY. This marked the beginning of Acme’s highly successful sales in the school and office products trade.

In the mid-1960s, Acme Shear began selling disposable medical scissors to hospitals and medical distributors. It later introduced a line of disposable hemostats, scalpels, forceps, and other surgical instruments, and became so successful that a new manufacturing plant in Fremont, North Carolina was opened to meet demand. 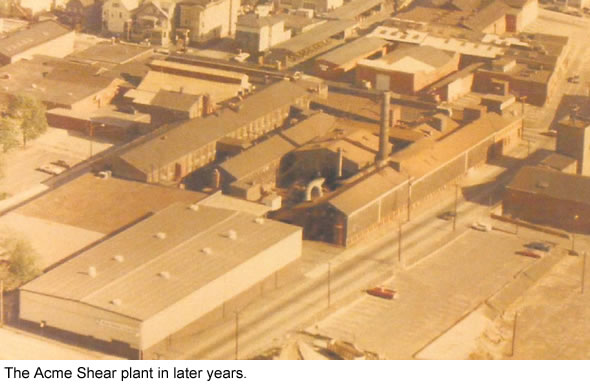 Acme Shear marked its 100th anniversary in 1967 and went public on the American Stock Exchange. At that moment, Acme accounted for approximately 75% of the cold forged scissors and 91% of the cast shears produced in the United States. Sumanco produced over half the total cast and forged scissors and shears in the United Kingdom. Combined employment was approximately 800 people, and output reached 50 million units annually.

Acme Shear continued its efforts of diversification. In 1970, it acquired Westcott Rule Company, a major ruler manufacturer, which was founded in 1872 in Seneca Falls, NY. To better reflect the expanded product line, the Company changed its name to Acme United Corporation.

In the late 1980’s, American Hospital began manufacturing many of the products themselves. Many of its hospital customers joined buying groups and began to pool their orders to obtain steep discounts, Moreover, the Company faced strong new competition from a United Kingdom medical supplier, Smith & Nephew. Acme United spent much of the late 1980s struggling.

During the early 1990’s Acme United continued to suffer losses, which was reflected in the Company’s share price. The stock, which had been trading around $25 in the 1980s, now sold for only $3, leading to strong shareholder pressure to implement significant management changes.

In November 1995, Walter C. Johnsen was named CEO. He replaced Dwight C. Wheeler who resigned. Johnsen had joined the board of directors earlier in the year to work on strategic focus and the medical business. He had previously been vice chairman and a principal of Marshall Products, Inc., an Illinois supplier of blood pressure units, stethoscopes, and other medical devices. Under his leadership, Marshall became the largest blood pressure unit supplier in the U.S. It was later acquired by Omron Corporation of Osaka, Japan.

After losing more than $8.7 million on sales of $52.2 million in 1995, Acme United initiated a cost reduction program. The Company closed seven manufacturing plants, with production moving to Acme United’s more modern, lower cost, facilities in North Carolina and oversees to Korea and China.

Brian S. Olschan joined in 1996 as senior vice president of sales and marketing from General Cable Corporation, where he was a fast-rising executive. He was soon promoted to Chief Operating Officer, and helped transform the Company from an old line manufacturer to one driven by innovation, and customer focus.

During the late 1990s, Acme expanded its North American school, home and office products businesses. As part of its strategic refocus, it sold its medical division for $8.2 million to Medical Action Industries, a Long Island-based supplier of medical and disposable surgical products.

Although the loss of the medical division significantly lowered the Company’s total revenues, Acme United returned to profitability, posting net income of $1.1 million in 2000 after losing $156,000 from continuing operations in 1999 and $1.7 million in 1998.

On An Acquisition Path

In 2004, Acme United reported a 24 percent increase in sales to $43.4 million, while net income grew to $3.2 million. With sales showing improvement in all markets, Acme United had completed its turnaround under Walter C. Johnsen’s leadership.

With business once again on an upswing, Acme United was in a position to grow externally. In June 2004, it acquired Clauss Cutlery, a Fremont, Ohio manufacturer of scissors and cutting tools for the floral and industrial markets.

The following years, the Company went on a true acquisition path.

• In 2007, the Company bought the brand names and intellectual property of Camillus Cutlery Company, one of the oldest knife manufacturers in the United States;
• In 2011, Acme United acquired Pac-Kit Safety Equipment Company, a manufacturer of first aid kits for the industrial, safety, transportation and marine markets;
• The following year, it acquired certain assets of The C-Thru Ruler Company, a well-known supplier of drafting, measuring, lettering and stencil products;
• In 2014, it acquired First Aid Only Inc., a supplier of first aid kits, refills, and safety products;
• In 2016, Acme acquired Diamond Machining Technology, a Marlborough, Massachusetts-based manufacturer of sharpening tools for knives, scissors, chisels and other cutting tools; and
• In February 2017, the Company acquired Spill Magic, Inc., a manufacturer absorbents and related products that are used to prevent slip & fall accidents.

Next to the high number of successful acquisitions, Acme United especially succeeds by applying new and improved materials to everyday products such as scissors, knives and school and office. Some blades will get a titanium carbonitride coating, making them more than three times harder than stainless steel. Or they will have a coating that prevents tools from rusting.

Others will have a non-stick coating, making them useful in sticky environments. Also, some school and office products have Microban antimicrobial protection added during the manufacturing process to prevent the growth of bacteria on the surface.

The combination of Acme’s relentless quest for innovation and its ability to acquire companies that fit right into its existing product mix make the Company a big success today.

After 150 years, Acme United is more vibrant and resilient than ever to withstand the ebbs and flows of international business. Walter C. Johnsen commented, “While Acme’s history is long, we have built a team of talented associates who I believe can carry us into the future. Our products are well-established, we are growing faster than our competition, and we are earning our sales every day. I look forward to continuing this tradition.”