It has been a matter of speculation for many years that the seabed of the Chatham Rise, off the coast of New Zealand, may represent an untapped source of Rare Earth Elements (REE). This intriguing concept was based on historic sediment samples from the area indicating significant content for this group of elements. Independent research by the United States Geological Survey has now confirmed that REE occur across a wide section of the seafloor holdings comprising the Chatham Rock project area and conceptual estimates for deposit size have been presented.

Given the challenges associated with extraction and refining for undersea resources, the potential was not thoroughly explored in the past. With the very real opportunity now advancing for Chatham Rock Phosphate Limited (TSXV: NZP – $0.15 & Fra: 3GRE – €0.08) to commence undersea mining for phosphate resources, the prospect for a complementary REE extraction program is suddenly much more realistic.

Formation of Subsidiary Opens the Prospect for Production Leverage

To more thoroughly investigate this potential, Chatham Rock has opted to form a subsidiary company, Pacific Rare Earths Limited (PRE), to begin work programs and focus primarily on the REE resources. This wholly owned subsidiary has been tasked with establishing the extent, value and subsequent recovery options for REEs that may also be outlined within the overall project area.

The Chatham Rise holdings are believed to be the largest deposit of REE in New Zealand. The appealing aspect to this prospect is that even a small percentage of the REE content could contribute a significant additional income to the proposed extraction plan for the primary phosphate deposit. The potential strategic and economic value for any viable production scenario is therefore going to attract more attention and build awareness for the entire seafloor mining operation envisioned by the Company.

In addition, the Chatham Rise project is likely to generate greater government support now that a strong REE presence has been established. After all, the ”green-tech” low-carbon emissions industry is heavily reliant on access to rare earth elements, and Energy and Resource Minister Megan Woods of New Zealand has repeatedly said that she sees several of the elements as potentially strategic for the country. 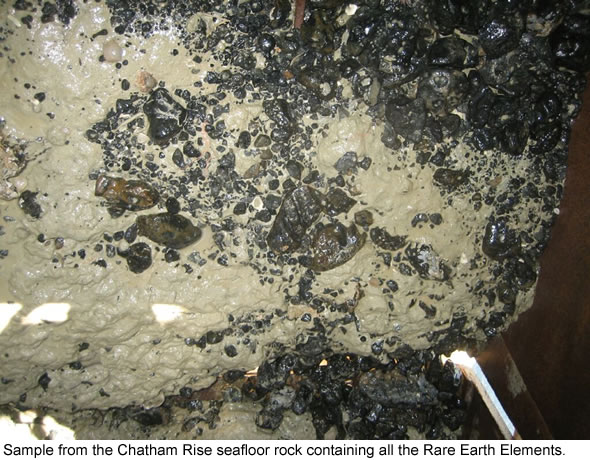 There are many unknowns that must be established to more accurately determine this potential. The formation of PRE provides the opportunity to launch studies focused on quantifying the REE aspect to the project without detracting from the primary objective to advance a phosphate producing operation.

PRE has already initiated preliminary discussions with third-party organizations and individuals that may contribute skills and funding to move the project ahead. This includes government agencies and international players interested in REE development.

The group of 17 elements known as REE includes cerium, dysprosium, erbium, europium, gadolinium, holmium, lanthanum, lutetium, neodymium, praseodymium, promethium, samarium, scandium, terbium, thulium, ytterbium, and yttrium. Although they are not necessarily rare in terms of the distribution within the earth’s crust, enriched deposits bearing these elements with favorable metallurgical characteristics for extraction are indeed very rare.

In fact, there are few economic deposits in the worldwide for primary mining of these elements. As a result, REE are usually produced as by-products from mining activity to recover other minerals. More than 95% of total world production is sourced from China.

REE have unique properties that make them attractive for numerous specialized and high-tech applications. The combination of critical demand for emerging technology products plus the potential limitations of supply has led to intense volatility and price swings for some of these metals.

In recent years the advancement of electric vehicles has sharply increased the demand for many of these elements, and contributed to a trend of rising prices for the group. With the prospect of capturing higher prices, the potential for an economic production scenario becomes more likely for a project developer.

The exciting new dimension created by the potential for REE production will have many positive implications for Chatham Rock. The forming of a wholly owned subsidiary company to outline a deposit and investigate production variables, creates options to form strategic partnerships and advance the project without compromising the primary focus to develop a phosphate extraction operation.

The conceptual extraction plan considered by the Company is for an operation to mine 1.5 million tons of the seabed phosphate deposit per year, which would potentially yield $250 million in sales. If a valid processing circuit could be achieved to also produce a REE by-product from the same extraction process, this could add a much larger overall financial windfall for the project.

In addition, the production of this strategic and valuable REE by-product would also build critical support towards securing necessary approvals and permitting to commence operations. The prospect to deliver REE production may also present additional project funding opportunities that may not otherwise be available. The formation of PRE is a step forward to achieving the objective for an offshore mining operation to become a reality. Recommendation: BUY.